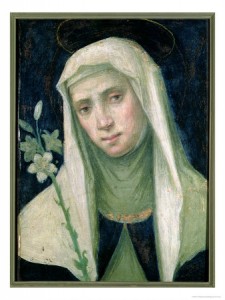 I love St. Catherine of Siena, and here are some quotes to live by:

“To a brave man, good and bad luck are like his right and left hand. He uses both.”

“Strange that so much suffering is caused because of the misunderstandings of God’s true nature. God’s heart is more gentle than the Virgin’s first kiss upon the Christ. And God’s forgiveness to all, to any thought or act, is more certain than our own being.”

Benedict XVI proclaims virtues of saints, says our lives too can become a canticle of praise to God.

A group of bloggers is holding a blog rally in support of Roxana Saberi (who is spending her birthday on a hunger strike in Tehran’s Evin Prison) and of others who have dared to express their thoughts freely only to be imprisoned, abused, or killed.

Please consider placing a blue ribbon this week on your blog, website, and facebook / myspace / twitter page, and invite others to do the same, in honor of the journalists, bloggers, students, and writers who are imprisoned in Evin Prison (nicknamed “Evin University”) and other prisons around the world for speaking and writing down their thoughts.

Officials in Iran need to know your concern for Roxana Saberi and your desire to return her home, and while she is in Iran to have a fair appeals process.

This from Fox News via the EFF.

The days of an open, largely unregulated Internet may soon come to an end.

A bill making its way through Congress proposes to give the U.S. government authority over all networks considered part of the nation’s critical infrastructure. Under the proposed Cybersecurity Act of 2009, the president would have the authority to shut down Internet traffic to protect national security.

The government also would have access to digital data from a vast array of industries including banking, telecommunications and energy. A second bill, meanwhile, would create a national cybersecurity adviser — commonly referred to as the cybersecurity czar — within the White House to coordinate strategy with a wide range of federal agencies involved.

The need for greater cybersecurity is obvious:

— Canadian researchers recently discovered that computers in 103 countries, including those in facilities such as embassies and news media offices, were infected with software designed to steal network data.

— A Seattle security analyst warned last month that the advancement of digital communication within the electrical grid, as promoted under President Obama’s stimulus plan, would leave the nation’s electrical supply dangerously vulnerable to hackers.

— And on Tuesday the Wall Street Journal reported that computer spies had broken into the Pentagon’s $300 billion Joint Strike Fighter project and had breached the Air Force’s air-traffic-control system.

Nonetheless, the proposal to give the U.S. government the authority to regulate the Internet is sounding alarms among critics who say it’s another case of big government getting bigger and more intrusive.

Silicon Valley executives are calling the bill vague and overly intrusive, and they are rebelling at the thought of increased and costly government regulations amid the global economic crisis.

Others are concerned about the potential erosion of civil liberties. “I’m scared of it,” said Lee Tien, an attorney with the Electronic Frontier Foundation, a San Francisco-based group.

“It’s really broad, and there are plenty of laws right now designed to prevent the government getting access to that kind of data. It’s the same stuff we’ve been fighting on the warrantless wiretapping.”

Sen. Jay Rockefeller, D-W. Va, who introduced the bill earlier this month with bipartisan support, is casting the legislation as critical to protecting everything from our water and electricity to banking, traffic lights and electronic health records.

“I know the threats we face.” Rockefeller said in a prepared statement when the legislation was introduced. “Our enemies are real. They are sophisticated, they are determined and they will not rest.”

The bill would allow the government to create a detailed set of standards for cybersecurity, as well as take over the process of certifying IT technicians. But many in the technology sector say the government is simply ill-equipped to get involved at the technical level, said Franck Journoud, a policy analyst with the Business Software Alliance.

“Simply put, who has the expertise?” he said. “It’s the industry, not the government. We have a responsibility to increase and improve security. That responsibility cannot be captured in a government standard.”

Warning bells for liberty should be resounding in our minds.

From the Personality Pages Site.

“Highly creative, artistic and spiritual, they can produce wonderful works of art, music and literature. INFPs are natural artists. They will find great satisfaction if they encourage and develop their artistic abilities. That doesn’t mean that an INFP has to be a famous writer or painter in order to be content. Simply the act of “creating” will be a fulfilling source of renewal and refreshment to the INFP. An INFP should allow himself or herself some artistic outlet, because it will add enrichment and positive energy to their life.”

It’s requoted from the Personality Page  site.  I should quote it directly but… a research paper this ain’t.