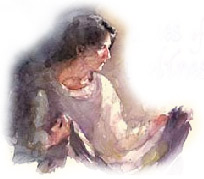 One of them, a woman named Lydia, a dealer in purple cloth, from the city of Thyatira, a worshiper of God, listened, and the Lord opened her heart to pay attention to what Paul was saying.

After she and her household had been baptized, she offered us an invitation, “If you consider me a believer in the Lord, come and stay at my home,” and she prevailed on us.

Lydia is an interesting figure in Acts. She was a ‘woman of God’, and she ‘listened’ when Paul spoke. She heard and understood, and within her heart the flame of knowledge quickened. She invited the missionaries to stay with her, opening her home to them.

She was the first European convert in Paul’s 2nd missionary journey, and was a dealer in purple cloth. Her work required considerable capital, as purple dyes were quite expensive and purple cloth was used for such things as the stripes in Roman Senator’s robes. So Lydia was faithful and emminently successul in working through the ways of the world. In other words, like many early Christians she was wealthy. And the European Church more than likely first convened in her living room.

One often considers that success in the world precludes true faithfulness or growth in holiness. However, nothing could be farther from the truth. To put it humorously:  It’s good to give God credit, but He needs cash too.

Remaining faithful amidst life’s trials is rarely as trying as remaining faithful during times of great success, when our minds and lives are wont to wander and we consider that perhaps we don’t need God since after all we’re succesful. Lydia is one of the many holy woman of the Bible who demonstrates great faith amidst a life of wealth and success.