From the Gospel reading today, Mark 4:35-41, we get the wonderful image of the Calming of the Storm.

The Sea of Galillee is known as Lake Kinneret around and about Israel. Kinneret means ‘harp’; the lake is harp shaped, though the name is taken from an ancient town which was located on the northwest shore. Galilee means “circle” and it’s the name of the lake and the region where it is located.

It’s below sea level, about 695 feet below at that, making it the lowest freshwater lake in the world. Because it is so low, air from the nearby mountains or deserts can settle in and cause rapid shifts in weather patterns, creating huge storms over the sea. It’s one such storm that the Gospel brings to life.

I visited the Sea of Galilee several years ago and was struck by it’s beauty. No picture I have ever seen does it justice, or prepares one for the rich abundance of the area. It’s no wonder God chose to live in that area for several years.

One of the most popular images of the calming of the storm on the internet is a picture of that name done by Rembrandt, The Calming of the Storm . It’s currently on the list of the FBI’s Top Ten Art Crimes! Who knew! (Great images of Biblical themes can also be explored via the Biblical Art Site.)

man of gentleness, man of peace, with words of life

Exploring and meditating on the life of Jesus Christ, which of course is what a Christian does, we note he’s a man of great gentleness, a man of peace; his words are life giving.

That description has been with me for several months now, and I keep going back to it, dwelling upon it to model my own life. In the calming of the storm we often look at the metaphorical level: Jesus calms the storms of our often troubled lives. 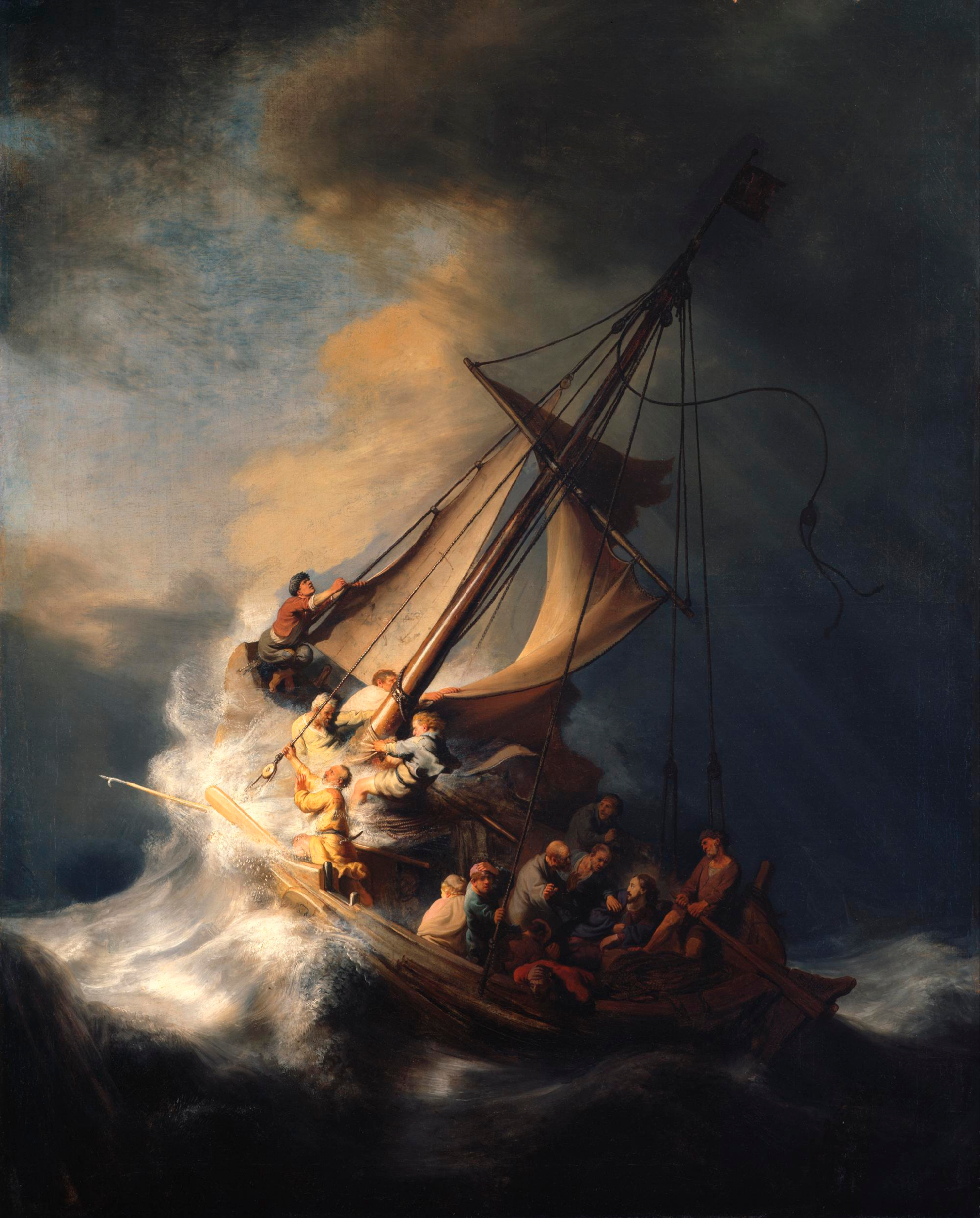 There’s a movie made in 2002 about John XXIII, his life, his election as Pontiff, his pontificate and ultimate calling of Vatican II. It’s a must see.

St. Paul’s second letter to the Corinthians reminds us today about love. The Corinthians were the recipients of a fantastic reminder of the greatest gift, the gift of love, in Paul’s first letter to them (1Cor13 ) Of course being all too human they needed a second letter from Paul to stay on course. (I mention that because I can relate to so well to being human.)

Through love, a loving personal relationship with Jesus Christ, through faith in him, we are transformed and made mysteriously new. All things are renewed by Christ’s redemptive work. It’s mysterious; no one expects that everyone will believe or accept that fact.

But it’s also true, and will transform the lives of those who believe. Immersed in Jesus Christ we are made new; we become a new creation in a mysterious, yet very real, way. We become oriented to understanding the mysteries of Faith, of Scripture, religion, of spirituality.

To adopt a way of life that is essentially nonassertive, non- violent, a life of humility and peace is in itself a statement of oneís position. But each one in such a life can, by the personal modality of his position, give his whole life a special orientation.

It is my intention to make my entire life a rejection of, a protest against the crimes and in- justices of war and political tyranny which threaten to destroy the whole race of man and the world with him. By my monastic life and vows I am saying no to all the concentration camps, the aerial bombardments, the staged political trials, the judicial murders, the racial injustices, the economic tyrannies, and the whole socioeconomic apparatus, which seems geared for nothing but global destruction in spite of all its fair words in favor of peace.

I make monastic silence a protest against the lies of politicians, propagandists, and agitators, and when I speak it is to deny that my faith and my church can ever be aligned with these forces of injustices and destruction. But it is true, nevertheless, that the faith in which I believe is also invoked by many who believe in war, believe in racial injustices, believe in selfrighteous and lying forms of tyranny. My life must, then, be a protest against these also, and perhaps against these most of all.

Our lives are a witness to peace.

“Consult not your fears but your hopes and your dreams. Think not about your frustrations, but about your unfulfilled potential. Concern yourself not with what you tried and failed in, but with what it is still possible for you to do.” John XXIII

For future reference, check out the Catholic Peace Fellowship.

Called to greatness, called to noble lives, we are instruments of God’s peace in our time on Earth.

I’m all set to write something and suddenly I cannot upload images because my computer crashes all the time!  That and evidently there are some java issues going on.  But that won’t get me down because I, of course, can cleverly post images via source codes.

EWTN’s site has a beautiful Act of Consecration to the Sacred Heart of Jesus which is entirely appropriate for today’s Feast.

Someone was asking about the picture of the lamb I posted the other day, and it actually has to do with one of my favorite Scripture passages, John 1:5 ,  “the light shines in the darkness and the darkness has not comprehended it” (depending of course upon your translation.)   The lamb is the light of the world, see.  When we experience darkness in our lives, it’s good to think upon Christ shining in the darkness, always reaching out to us, always calling us to himself, into his Sacred Heart.

I was thinking about this yesterday because of Vincent Van Gogh‘s painting Starry Night.

Van Gogh was of course insane… people ponder that perhaps his entire life was a spiritual journey. But then elsewhere I read that his spiritual life would be gone because he suffered with addictions to absinthe, alcohol, God knows what else. And I was left to ponder upon Christ’s work in our lives.

You see, for everyone, because everyone is addicted to something even if it’s coffee or chocolate (and thank God there is chocolate,) or operates at some level of dysfunction, (it’s referred to as a part of original sin by some, or as part of our fallen human nature,) Jesus Christ reaches out as the Divine Healer. All through the Gospels he goes out to the leper, goes out to the blind man, cures them, heals them, makes them whole, brings them back into the fold, back to the Father.

Especially when we are wounded or wandering, lost in a sea of brokeness, we should be aware of God’s presence mysteriously in our lives because he goes after the lost sheep with ardor. How much would he search for that one lost sheep while the other 99 were safe, and how much would he rejoice when we came back into the fold.

I beseech Thee, through Thine infinite Goodness, grant that my name be engraved upon Thy Heart, for in this I place all my happiness and all my glory, to live and to die as one of Thy devoted servants.

I cannot imagine a better way to spend Corpus Christi Sunday than with the Mass, a wonderful lunch with friends, a liesurely walk and a relaxing evening. Add to that a great time visiting over breakfast and it was a lovely day all around.

All things in their time! Rome wasn’t built in a day! God grant me the serenity to accept the things I cannot change… etc. etc. I can though, work on changing that in or by January.

Great Corpus Christi article by Rick Salbato here, and of course from the Catholic blogs aggregator here and here.

“Two of the pubs near Oxford which C.S. Lewis frequented were The Trout and The Six Bells.

Some of Lewis’s American readers had written him to inquire about his views on drinking alcoholic beverages. His response to them was in no uncertain terms:

‘I have always in my books been concerned simply to put forward mere Christianity, and am no guide on these (most regrettable) interdenominational questions. I do however most strongly object to the tyrannic and unscriptural insolence of anything that calls itself a Church and makes teetotalism a condition of membership.

Apart from the more serious objection (that Our Lord Himself turned water into wine and made wine the medium of the only rite He imposed on all His followers), it is so provincial (what I believe you people call small town). Don’t they realize that Christianity arose in the Mediterranean world where, then as now, wine was as much a part of the normal diet as bread?”

Courtesy of The Six Bells Blog.

My life on sabbatical was lovely, but I've moved on from that back into our very active Parish life.

Because so many ask, you're free to send prayer request through my email, my address below, through Twitter, or any other way you'd like. Donations can be made through my PayPal Me

Feel free to shoot me an mail.