The Holy Trinity appears in this beautiful music book, by Father Athanasius Kircher, Musurgia Universalis, in the University of Glasgow’s collection. 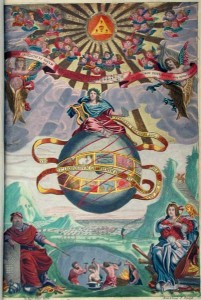 The triangle at the top is the symbol of the Holy Trinity and sheds its rays over the whole of the top of the picture. Kircher held to the medieval idea that music is a reflection of the essential mathematics and proportions inherent in all Creation so the Trinity was not only a symbol but a real dogma.

Under the Trinity we find the nine angelic, four-voice choirs, singing a 36-part canon by Romano Micheli.

The canon is properly described as “canoni sopra le vocali di piu parole” (“on the vowels of a few words”) although in the present case the words ascribed are those of the angelic choirs in the Trishagion – “Sanctus, sanctus, sanctus“, as described in Revelation.

The strip of text reads: “Angelic choir of 36 voices” (then the Sanctus music notated in staff notation) “distributed in 9 choirs”.

The middle section is dominated by a globe of the World, on which is seated Musica, holding the lyre of Apollo and the panpipes of Marsyas. The globe is encircled by the Zodiac, and Musica holds also a streamer bearing the legend “Of Athanasius Kircher of the Society of Jesus, Universal Musicmaking or the Art …” (being the beginning of the full title of the work).

Round the last part of the streamer is displayed the dedication “To His Serene Highness Leopold William, Archduke of Austria.” Other symbols in this section include rings of dancing mermaids on the shore, a shepherd trying out the echo and the winged horse of the Muses, Pegasus.

The lowest part of the picture shows blacksmiths in a cave: the sound of blacksmiths hammering had led Pythagoras to important conclusions about the nature of pitch and the blacksmiths are acknowledged in the picture by being pointed out by Pythagoras, who also holds an illustration of his theorem, also using triangles, and hence referring obliquely once again to the top of the picture.

The muse on the right may be Polymnia who appears in standard pose surrounded by musical instruments of various kinds. 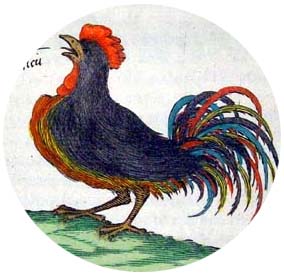