Given that St. Louis is the Patron Saint of New Orleans, and the Cathedral there is named after him, it seemed fitting to make a pilgrimage to his resting place. He’s at the Basilica of St. Denis, which contains the Royal Necropolis. It’s built over the grave of St. Denis, early Bishop of Paris. 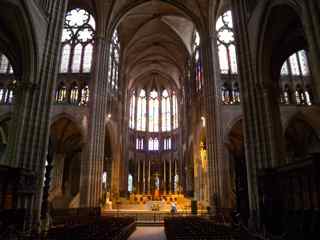 Come to find out, there’s only a little bit of him left — part of a finger to be exact, and it’s in a beautiful reliquary in a special chapel which predominates the upper Sanctuary at the very crown of the church. 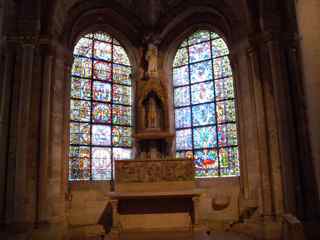 Almost all of the Catholic French monarchs are buried there including everyone’s favorite, Marie Antoinette. She’s in the middle, on the left. 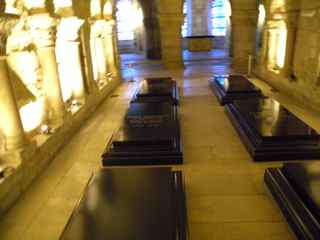 Many of the tombs were originally decorated with these funereal statues. During the revolution they were saved by a savvy statesman who claimed them as national art treasures. The family remains were all removed, and the funereal statues / coffins were removed to a museum. Later, everything was moved back, but most of the monarchs’ remains have been placed in a large common ossuary, except for those who could be identified. For instance, the monarchs after Napoleon, and Marie Antionette and her husband Louis XVI, who were moved from the grave they were placed in quite unceremoniously after they were murdered, had their remains placed in their own graves here. 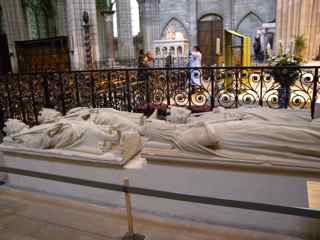 Here is a cape worn by Louis VII during some of the royal ceremonies of St. Denis, back in his day. 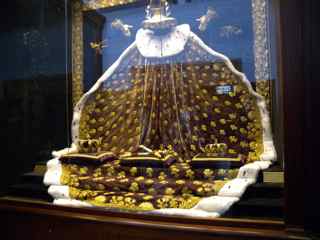 And below is from a print, showing how the Church was draped and made ready for the funeral of a Queen of France. 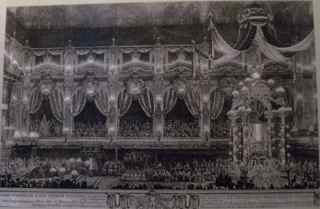