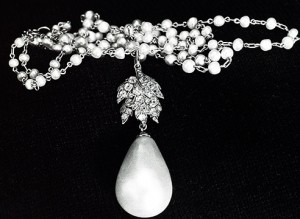 Editor’s Note: This is basically from my notes, please pardon the large section of blockquotes included ostensibly for your convenience. The Homily was in actuality about five minutes long.

A Pearl of Great Price

We learn that it is not just going to happen, it comes at a great price.

Here we celebrate the Sacrifice of the Mass, and the Holy Eucharist. The Catechism teaches us that the Eucharist is the “ Source and Summit of Our Faith”.

We can look at it as the Source of our Faith, simply throughout the week, as we come to Mass at the beginning of the week to be nourished by it. The spiritual affects are very real, though sometimes we may not be aware of them.

We receive the remission of venial sin, are infused with supernatural grace, and are able then to go out and live our Faith in the world throughout the week.

Friday, we know, is a penitential day in the Universal Church; and throughout the world the penance is to eat no meat. While in the US we have permission to eat meat on Friday’s, every country has some permission or other, we are obligated to observe some form of other penance if we do eat meat.

The reason for a penitential day is, of course, the Lord died on a Friday and we recall his passion in a special way. Moreover, we pause to reflect on our actions during the week and to come to contrition for any sins, any way in which we have ‘missed the mark’, during the week, so that we might be in a state of grace to receive the Eucharist again at Mass on Sunday.

The summit of our week is again directed to Mass, and the Eucharist. 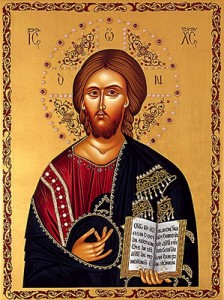 A reflective life, given to considering and praying for discernment of God’s will for our life, and nourished by His grace, will give us rejuvenation of spirit and allow us to more fully focus on the will of GOd for us.

The Gospel tells us that one ‘sells all that he has,’ and pursues the purchase of the field, or of the pearl of great price. Do our actions in life exhibit such zeal for the kingdom of Heaven?

Which introduces us to several concepts worth considering today:

All of us are desired, by God, to enter heaven, even the most unlovable person you know… But – only God knows who will enter Heaven.

The Catholic Encyclopedia, 1917 edition, has a very thorough, and wonderful article on pre-destination. It tells us:

“Predestination (Latin præ, destinare), taken in its widest meaning, is every Divine decree by which God, owing to His infallible prescience of the future, has appointed and ordained from eternity all events occurring in time, especially those which directly proceed from, or at least are influenced by, man’s free will. It includes all historical facts, as for instance the appearance of Napoleon or the foundation of the United States, and particularly the turning-points in the history of supernatural salvation, as the mission of Moses and the Prophets, or the election of Mary to the Divine Motherhood. Taken in this general sense, predestination clearly coincides with Divine Providence and with the government of the world, which do not fall within the scope of this article (see DIVINE PROVIDENCE).”
Cath encyclopedia, 1917

Pardon me while I’m blockquoting from my notes here, but the article goes on to say…

“Theology restricts the term to those Divine decrees which have reference to the supernatural end of rational beings, especially of man. Considering that not all men reach their supernatural end in heaven, but that many are eternally lost through their own fault, there must exist a twofold predestination: (a) one to heaven for all those who die in the state of grace; (b) one to the pains of hell for all those who depart in sin or under God’s displeasure.”
God’s unerring foreknowledge and foreordaining is designated in the Bible by the beautiful figure of the “Book of Life” (liber vitæ, to biblion tes zoes).

This book of life is a list which contains the names of all the elect and admits neither additions nor erasures. From the Old Testament (cf. Exodus 32:32; Psalm 68:29) this symbol was taken over into the New by Christ and His Apostle Paul (cf. Luke 10:20; Hebrews 12:23), and enlarged upon by the Evangelist John in his Apocalypse [cf. Apocalypse 21:27: “There shall not enter into it anything defiled … but they that are written in the book of life of the Lamb” (cf. Revelation 13:8; 20:15)]. The correct explanation of this symbolic book is given by St. Augustine (City of God XX.13): “Præscientia Dei quæ non potest falli, liber vitæ est” (the foreknowledge of God, which cannot err, is the book of life).

However, as intimated by the Bible, there exists a second, more voluminous book, in which are entered not only the names of the elect, but also the names of all the faithful on earth. Such a metaphorical book is supposed wherever the possibility is hinted at that a name, though entered, might again be stricken out [cf. Apocalypse 3:5: “and I will not blot out his name out of the book of life” (cf. Exodus 32:33)]. The name will be mercilessly cancelled when a Christian sinks into infidelity or godlessness and dies in his sin. Finally there is a third class of books, wherein the wicked deeds and the crimes of individual sinners are written, and by which the reprobate will be judged on the last day to be cast into hell (cf. Revelation 20:12): “and the books were opened; … and the dead were judged by those things which were written in the books according to their works”.

It was this grand symbolism of Divine omniscience and justice that inspired the soul-stirring verse of the Dies irœ according to which we shall all be judged out of a book: “Liber scriptus proferetur: in quo totum continetur”. Regarding the book of life, cf. St. Thomas, I, Q. xxiv, a. 1—3, and Heinrich-Gutberlet, “Dogmat. Theologie”, VIII (Mainz, 1897), section 453.

And I paraphrase here…

(The full text of that article is well worth reading, and is found at New Advent’s Catholic Encyclopedia site.)

What does THAT mean?

However, this does not negate our own free will in living our lives. God created us with free will, and the ability to choose, which means that we make a free and conscious decision to love God, and to follow his ways. If we did not have free will, our love would be less meaningful, and hardly as profound. We’re free to love God and live in his ways (which along with God’s grace helps us to be justified,) and we’re also free to choose any other way of life we desire.

Our society today is greatly influenced by popular notions of heaven and hell, through media imagery. Also, we live in a country which is a fairly Protestant country and which often portrays the idea that anyone, and just about everyone, is heading to heaven, no matter how they live their life.

Jesus Christ never tells us that. He says the way is narrow; he says he will turn to many and say to them “I do not know you.”

(That being said, he also turned to the repentant thief and promised him that ‘this day’ the thief would be with Christ in Paradise.)

So, not everyone chooses to live in a state of grace. Not everyone who thinks they are going to heaven, is going to go to heaven. Many people fear hell, but not as many love God with all their heart, their mind and their soul.

We have a choice in the matter, and our choice affects are lives. Our choices affect our actions, which directly reflect our beliefs.

We Don’t Earn our Way to Heaven

In the Second Letter of Peter, verse 1:10, we read: “Therefore, brothers, be all the more eager to make your call and election firm, for, in doing so, you will never stumble.” St. Paul also tells us to work all the harder to as to make our election permanent.

This implies, as does Jesus in the Gospel, that our actions should result from our belief in God, and should reflect a desire for the Heavenly Kingdom. We don’t work so as to earn our way into Heaven; we rely on God’s grace of course.

But if our actions are devoid of Faith, and demonstrate that instead we are given over to works and deeds of darkness, then something is amiss in our world if we truly desire Heaven.

Prayer and reflection according to our state in life are key.

Living a life of Faith on a daily basis calls for prayer, meditation on God’s Word, and some level of sacrifice.

We discern His will for our lives, for our day, and let that help to inform our plans. We confess our sins to one another. And that is raised to the level of a Sacrament in the Church so we go to Confession at least once a year, preferably much more often.

Repentance for our sins implies first and foremost an awareness of sin in our life. Where we ‘miss the mark’ of holiness. And prayer, fasting and almsgiving are key aspects of penance.

Our actions during the week should be informed by the Spiritual and Corporal Works of Mercy, and to living a life conformed to Jesus Christ, in his discipline, in discipleship.

Signs of Desire for the Kingdom

Selling all we have and buying pearl of great price, and selling all we have to buy the field of buried treasure; giving up those things which bind us in ignorance; giving up a life lived entirely for ourselves; letting go of our own notions and trusting that God will reveal His notions of our life; are all signs of desire for the Kingdom.

The Kingdom of Heaven is at hand, for all whom God calls. He wants for us all to choose to live with him in glory. Do we respond with fervor, as if it’s a pearl of great price? Or do we simply ask our God to bless our lives, and go about our business entirely unaffected by the inspirations of grace?