Okay, so here’s the lowdown on my latest excursion into Coconut Rolls. 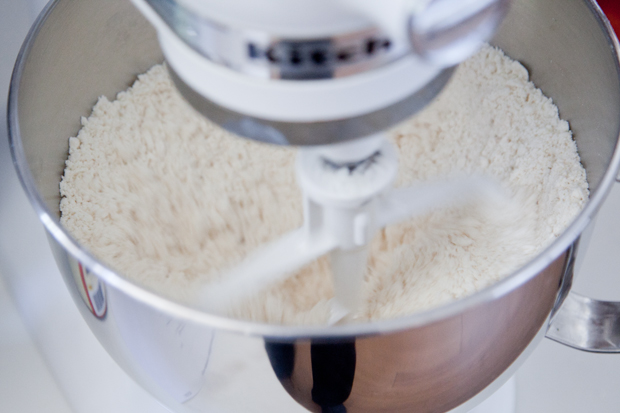 I used a stand mixer because it makes my life easier and I don’t mind the one minute it takes to clean the thing afterwards.

You mix unbleached all-purpose flour, (bleached flour is horrible for us,) with margarine in the recipe, but I used coconut oil instead since margarine is so un-natural, and coconut oil can be very good for us. If you haven’t guessed yet, I’m a coconut oil fan. 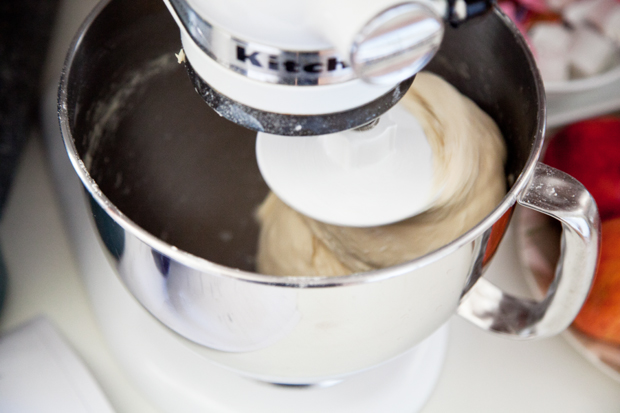 It stayed on the stand mixer about 10 minutes with the dough hook, on low, with the bowl scraped down a few times. The mixer wants to dance off the counter at times, but not very much. For this mixer, you just set it on “2”, according to the manual for bread doughs. 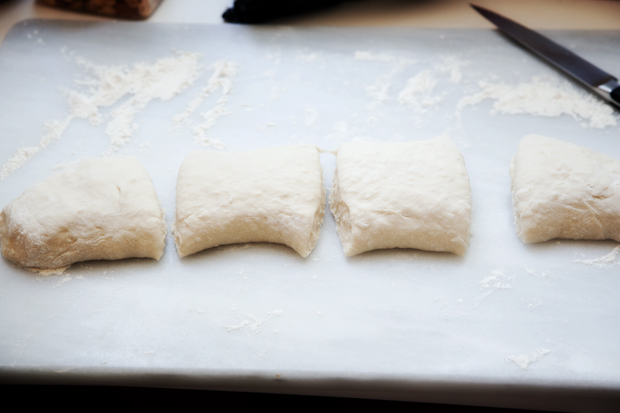 After that process, you roll the dough out into a log, and cut it into twelve pieces (one for each Apostle of Christ.) First cut the log into halves, then halve the halves into quarters… 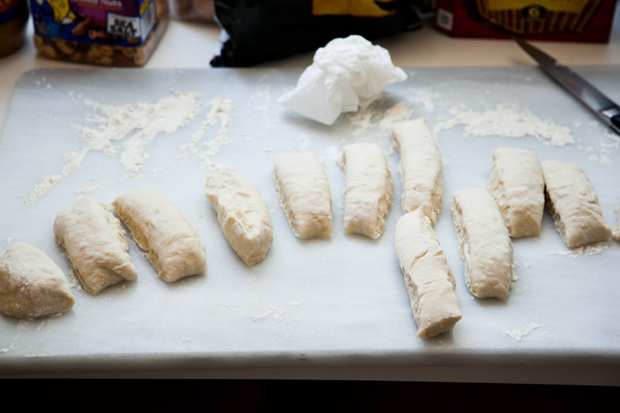 …and then cut each quarter into thirds. Given such precision methods, mine are still completely uneven. But you know what? It doesn’t matter.

What does matter is that my rolling board is being pushed off the countertop by the accumulated snacks behind it. Sigh.

At this point, cinnamon roll recipes would have rolled the dough flat and spread it with a mixture of cinnamon, sugar, butter, cayenne pepper, hazelnuts, turmeric… Hmmm.

Speaking of which, I was making something the other day and sprinkled some paprika into the dish and, unfortunately, the paprika had become infested with a huge, enormous and completely gross colony of mealy bugs. What is it with exotic spices and mealy bugs? Or anything and mealy bugs. I bought some walnuts once at a middle eastern store and they turned out to be infested with mealy moths which took forever to get out of the pantry. They’re probably still there. The dish was a wreck.

So. Now, where were we again? 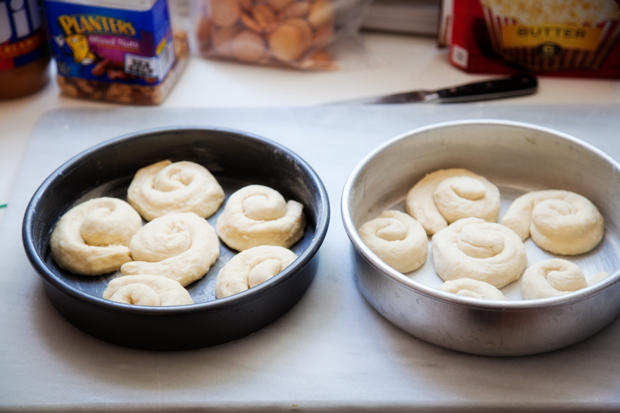 Instead of rolling the dough flat, spreading a filling over it and then rolling it up, you simply roll these pieces into little logs and then roll them up individually.

It was not as tedious as it sounds. But it was still a bit tedious. I’d rather come up with some type of filling and then roll it up and cut it. Anything to make my life a bit easier I tell you. If you don’t simplify the process somewhere, next thing you know you’ll be raising your own coconuts.

One they’re in the pans you let the rise until doubled in size, which took about 1.5 – 2 hours. Or so. My pans don’t match because I’m a man, and men don’t worry about those kinds of things. The pans are coated with coconut oil and flour. 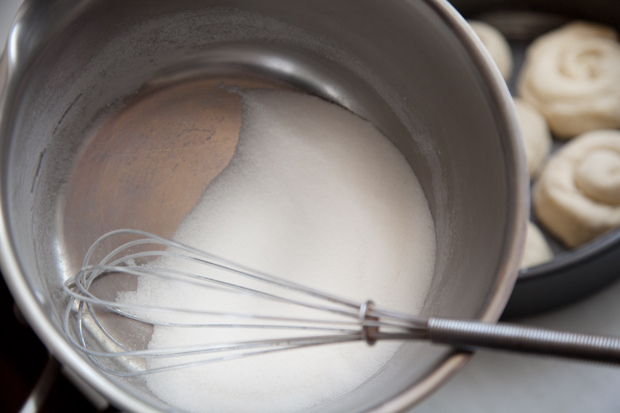 While those rise you make the glaze. Mix the sugar and cornstarch… The recipe called for corn flour which I don’t have. 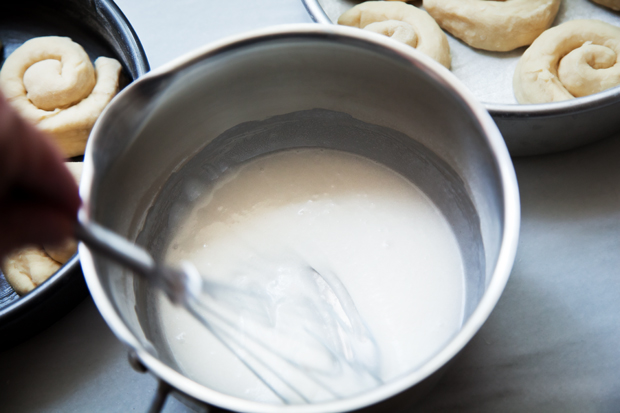 Mix in some coconut milk to make a smooth paste… 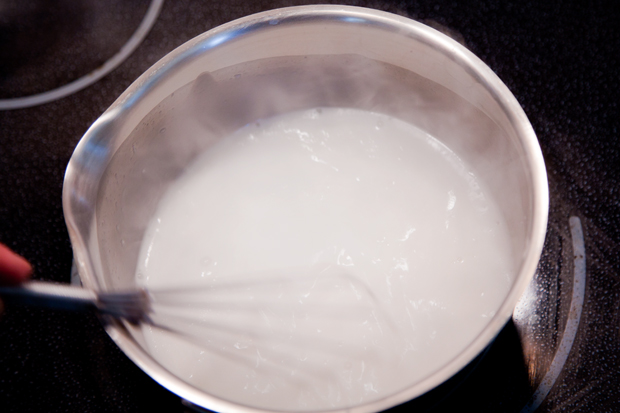 Add the rest of the coconut milk and the coconut, then cook over low to medium low to high heat until the sauce thickens.

Can you see the glass topped electric stove we have here? It’s not always easy to gauge temperatures on it, and it’s very easy to burn or scorch things if you don’t take care. If I were in college and/or only boiling up hot dogs I’d probably love it. As it is, I dream of one day using gas again. Or at least a better electric stove. 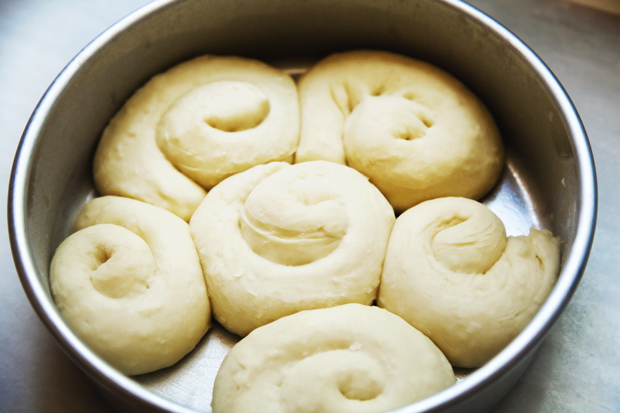 The dough rises. I didn’t think it had risen enough, and was concerned that maybe I should have used an 8″ pan. But I had used a bit of baking powder also…. 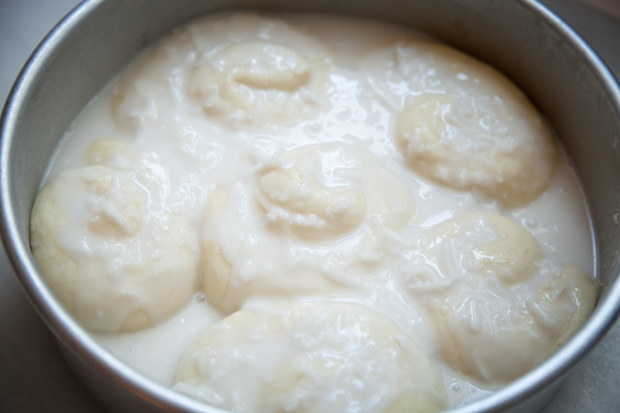 Cover the rolls completely with this thick, luscious, creamy glaze… 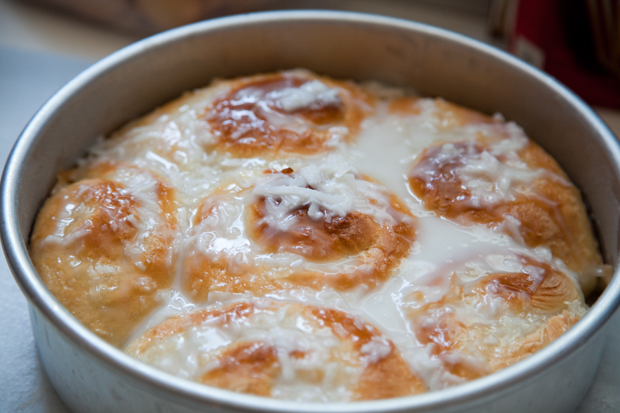 And bake until done. Despite thinking they hadn’t risen enough, they rose beautifully.

Immediately after taking them out, I poured some more of the glaze over them, as you see pictured here.

Had I not done so, or had I poured on less of the glaze after they came out of the oven, I think they might have been almost exactly like the wondrous rolls over at Dong Phuong (If I link there enough, maybe they’ll notice me and take pity on me, and tell me how to make their delicious coconut rolls.)

Except that I think Dong Phuong puts a small coconut glaze filling inside and then rolls them up like cinnamon rolls. Which is what I am going to do next time. 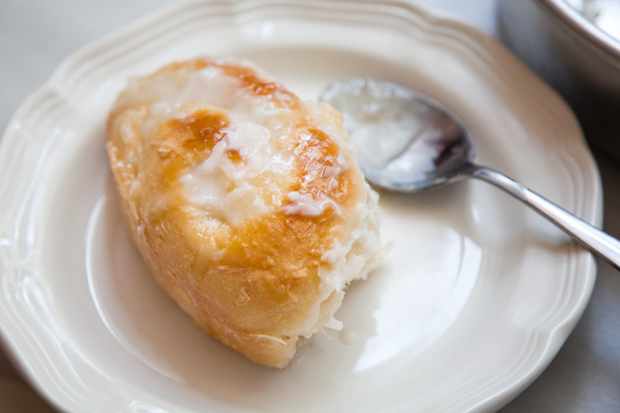 All of that being said, these are wonderful. Try them as soon as you can! If you like coconut that is. If you don’t like coconut, then please forgive this entire, lengthy, coco-nutty post. And, I hate to say this, almost, but they’re really almost as good as Dong Phuong‘s.

Here is the recipe as I made it:

Mix the yeast and sugar with 1/4 cup warm water. Let the yeast action begin for a few minutes. If nothing’s happening your water is probably not warm enough, or the container cooled it down. 30 seconds in the microwave works for me in such instances.

Put the flour, coconut oil and coconut into the mixing bowl and combine with the paddle attachment. Add in the baking powder at any point in this process.

Add the yeast, sugar and water to the flour and combine. Then work in the cup (about a cup; I used two cans total in the entire recipe between this and the 2 cups in the glaze) of coconut milk and knead for 8 minutes.

If the mix is too sticky add some more flour. It’s a bread dough.

Shape the dough into a log, and divide the log into 12 pieces. Then, roll each piece into a small log about 1/2 inch or so thick, and coil each one into a roll shape and place onto a 9″ round cake pan prepared with coconut oil and flour. Put six (6) to a pan.

Cover with a cloth and let rest in a warm place till doubled in size.

Put the sugar and cornstarch in a small skillet and whisk together.

Whisk in the dry coconut. Dry coconut does not whisk well, but surely you’re already aware of this.

Add in the two cups of coconut milk.

Place pan over a medium low heat and cook for a few minutes until the liquid thickens.

Remove from heat, stir in the vanilla and reserve.

Later, once the rolls have doubled in size, pour over half the coconut glaze and place in the oven and bake for 25-30 minutes or until golden brown.

Remove the rolls from the oven when done, pour the rest of the glaze over the rolls, and serve warm.

Have a good one, S’amusez-vous!