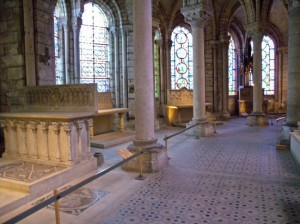 Two years ago I made a sacred pilgrimage to the tomb of St. Louis, King of France. It was fraught with both ignorance and wonder.

I’m intent on writing about that, but I’ve become convinced that tonight my computer is possessed and needs a thorough healing. Either that or I’ve got too many image files stored on it, and it needs a thorough cleaning, which is entirely posible.

Here are several things about St. Louis, culled around the net, which help to provide some insight into the remarkable man that he was.

He left a legacy as an exemplary King in Christendom, and was admired by almost everyone. France became a pre-eminent power in Europe militarily, financially and culturally. Napoleon said of him that he was the only king of France worthy of the title.

Louis IX considered himself, “God’s lieutenant on Earth”; he took that seriously and prayerfully, and left behind a wonderful legacy for the world to follow.