As we all know it’s been 100 years this weekend that the Titanic sank like tons of iron to the floor of the Atlantic Ocean.

Charles Lightoller was second in command on board the ship, and was one of the few surviving crew. His testimony has been crucial throughout the years in all of the hearings and subsequent recreations. What’s often gone unsaid is that Lightoller was a devout Christian, and ascribed his survival to his faith in Jesus Christ and a Biblical spirituality. Here is his testimony to the Christian Science Monitor: 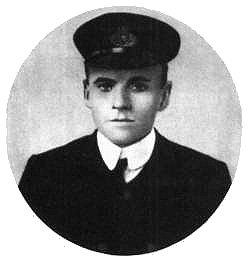 While the Titanic was sinking, and during the whole time I was working at the boats, I held to the truth, thereby eliminating all fear.

I was on the port side where all boats were got away without a hitch, the last one, a flat-bottomed collapsible, floating off the deck. I called on men to follow me up on top of the officers’ quarters to cut adrift the last boat. We had no time to open it up, so just hove her down to the deck.

I ran across the deck and could see that all material work was finished, so from where I was above the bridge, I walked into the water.

The sudden immersion in this penetratingly cold water for a few seconds overcame all thought, and I struck out blindly for the crow’s-nest which is on the foremast and then just above the water. I found myself drawn with great force against the grating covering the mouth of the huge forward blower. In this position I went below the surface with the ship.

A doubt never entered my mind as to the ability of divine power to save me. These words from the 91st Psalm came to me so distinctly: “”He shall give His angels charge over thee.”

Immediately, I think, I was thrown away from the blower and came up to find a piece of wood in my hand which seemed to be attached to the top of the funnel by a wire. A second time I went down and again came to the surface.

My piece of wood was gone, but alongside me was the flat-bottomed collapsible boat which I had thrown down on the other side of the ship. This I laid hold of, but made no attempt to board it.

It was clear to me there was a divine power and it seemed perfectly natural to rely on it with the spiritual understanding spoken of in the Bible. With the sinking of a great ship like the Titanic, there was also the fear of suction to overcome, and at this time the forward funnel fell, throwing the boat, me, and other survivors about twenty feet clear of the ship, so that of suction we felt nothing.

About thirty of us floated the remainder of the night on the upturned boat. At daybreak we found two life-boats floating nearby, into which we were taken. Reaction or effects from the immersion were none; and though surprise has been expressed by very many, it only goes to prove that “with God all things are possible”.