The other day I hiked the Berg Lake Trail with my buddy Fr. Jimmy. Here are a few photos from the trail… 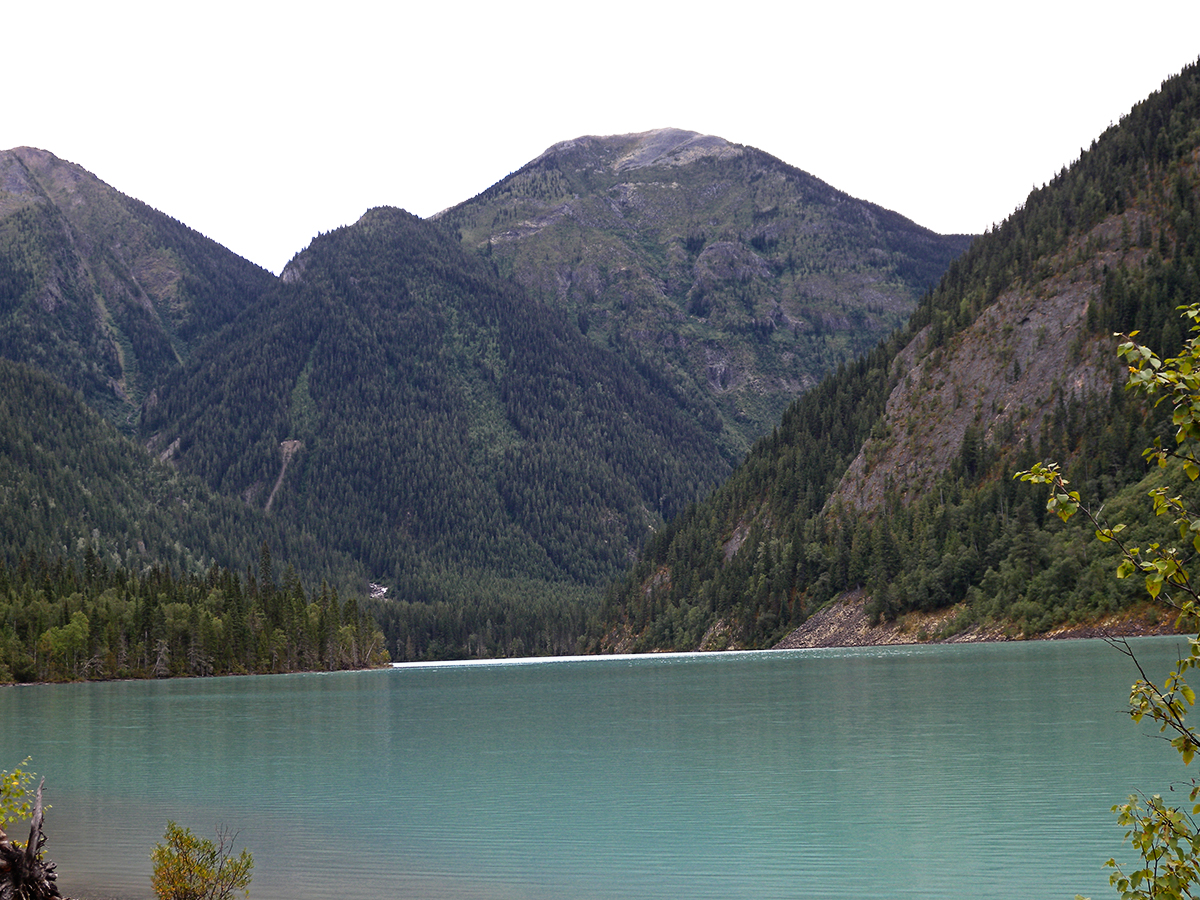 I had not relished the thought of doing this trail for quite a few reasons. Mainly, it’s a 12 mile hike with a serious altitude gain in the last half, and we were doing it after a brutally long day of travel.

That being said… I loved it. And I would do it again in a flash! 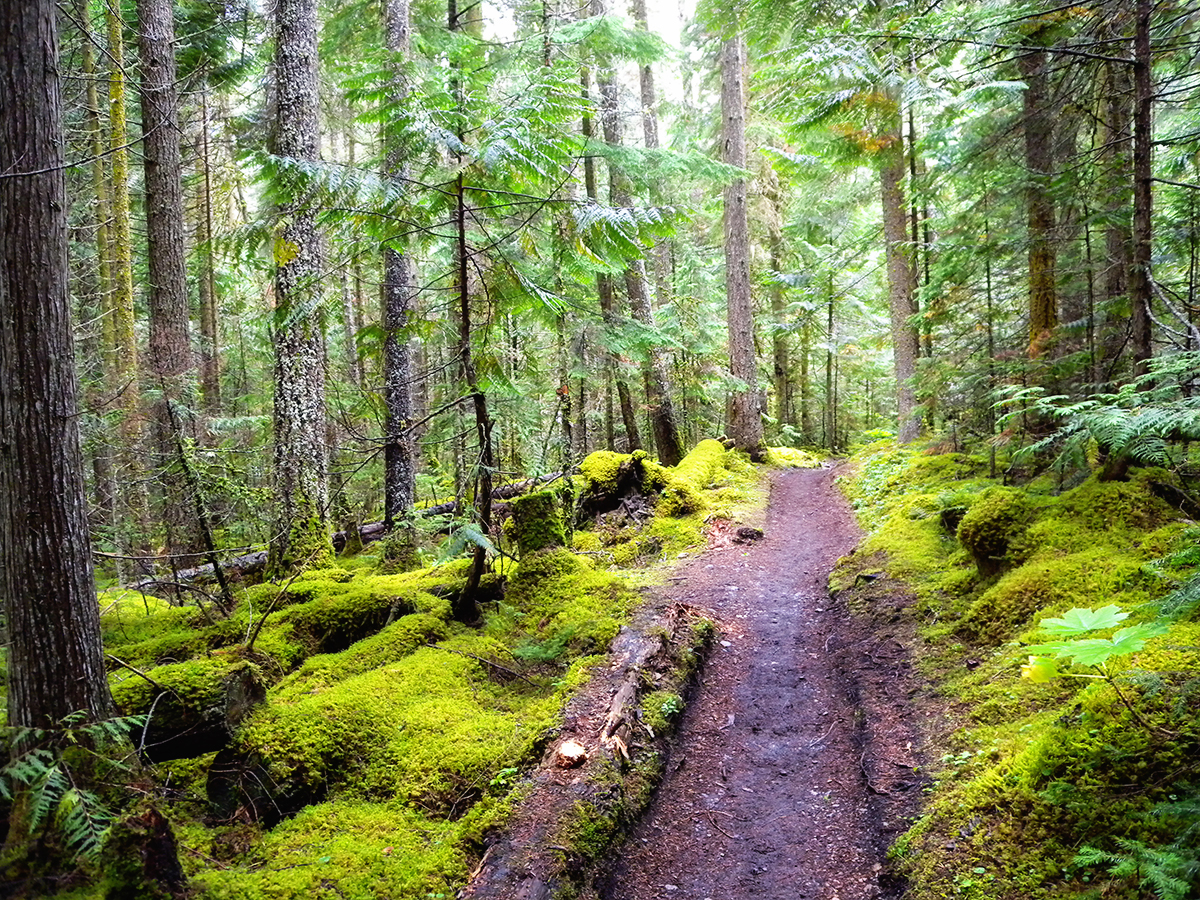 It’s a cool weather rain forest, and after steeping in Louisiana heat all summer long, I felt like it was winter in a strange new land. A beautiful new land, too. Lower temperatures do that to us southerners. 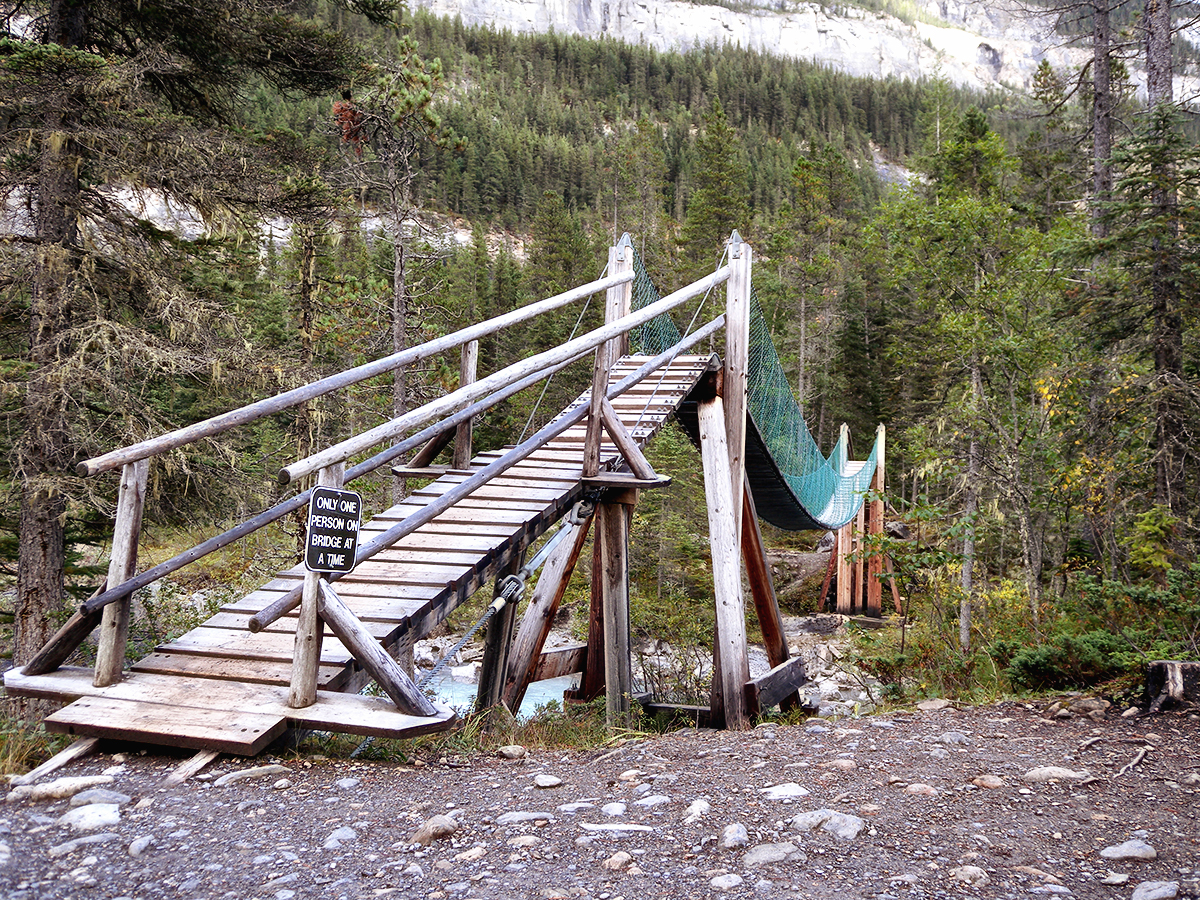 We passed a lot of truly beautiful photo-worthy scenery, however photo taking was not my priority on this once in a lifetime opportunity for amazing photography. I just wanted to get away and be in the outdoors and walk around and take it all in, and be amazed with the grandeur of God’s creation.

That’s also a really nice way of saying that I didn’t take many photos because I had my smaller camera with me, and things happened like the strap in the middle of the picture, or the dampness caused the lens cover to falter… a lot of pictures just did not come out.

But this one did! It’s a bridge I had seen on the internet and I wanted my very own picture of it. At this point you’ve walked about 6 miles, fairly standard ups and downs, and are now at the Whitehorn camp site, which is where we ended up spending the night. 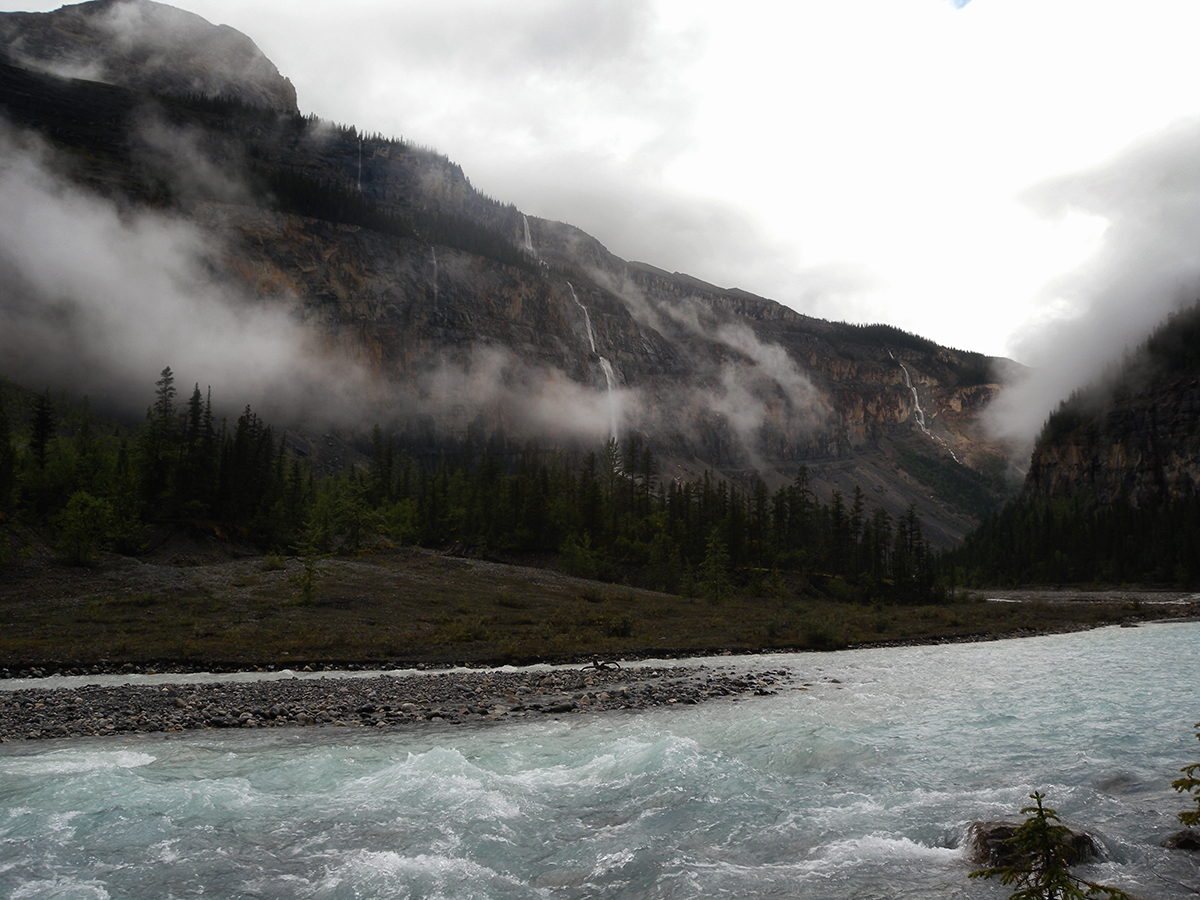 The glacial river runs by, providing a great water source and a relaxing sound to fall asleep to. There’s an open air shelter which has a wood burning stove in it, so that if it’s cold, damp weather no one will get hypothermic. Very thoughtful! Of course I don’t have photos of any of that… but that’s just me. 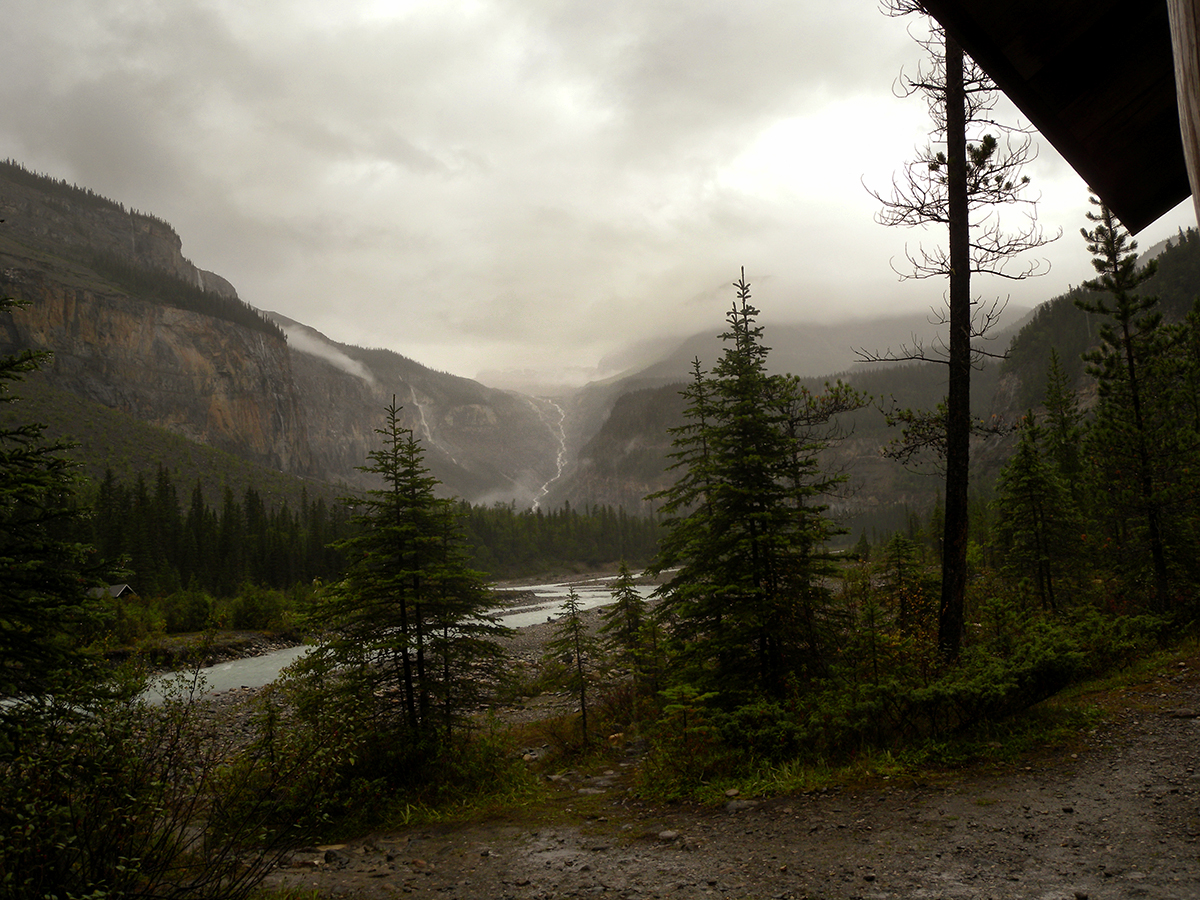 It’s a beautiful place. We had rain, mist, clouds, and it was exquisitely beautiful. 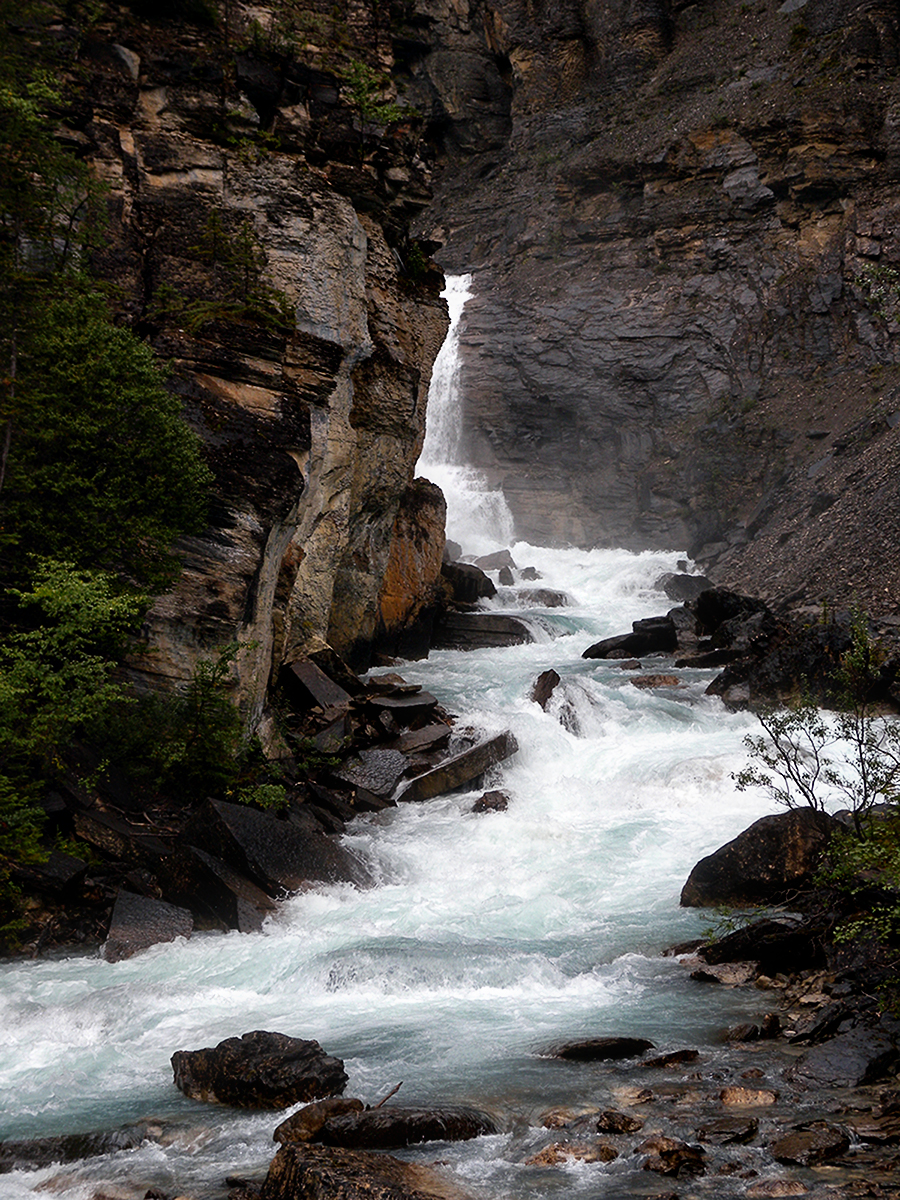 In the morning we walked around the bend and crossed the river, ready to make the huge ascent up to Lake Berg. The thought of hiking up the steep ascent had me running in extra cautious mode… but the scenery was beautiful and well worth the effort. And whats a hike in the mountains without some steep ascents? 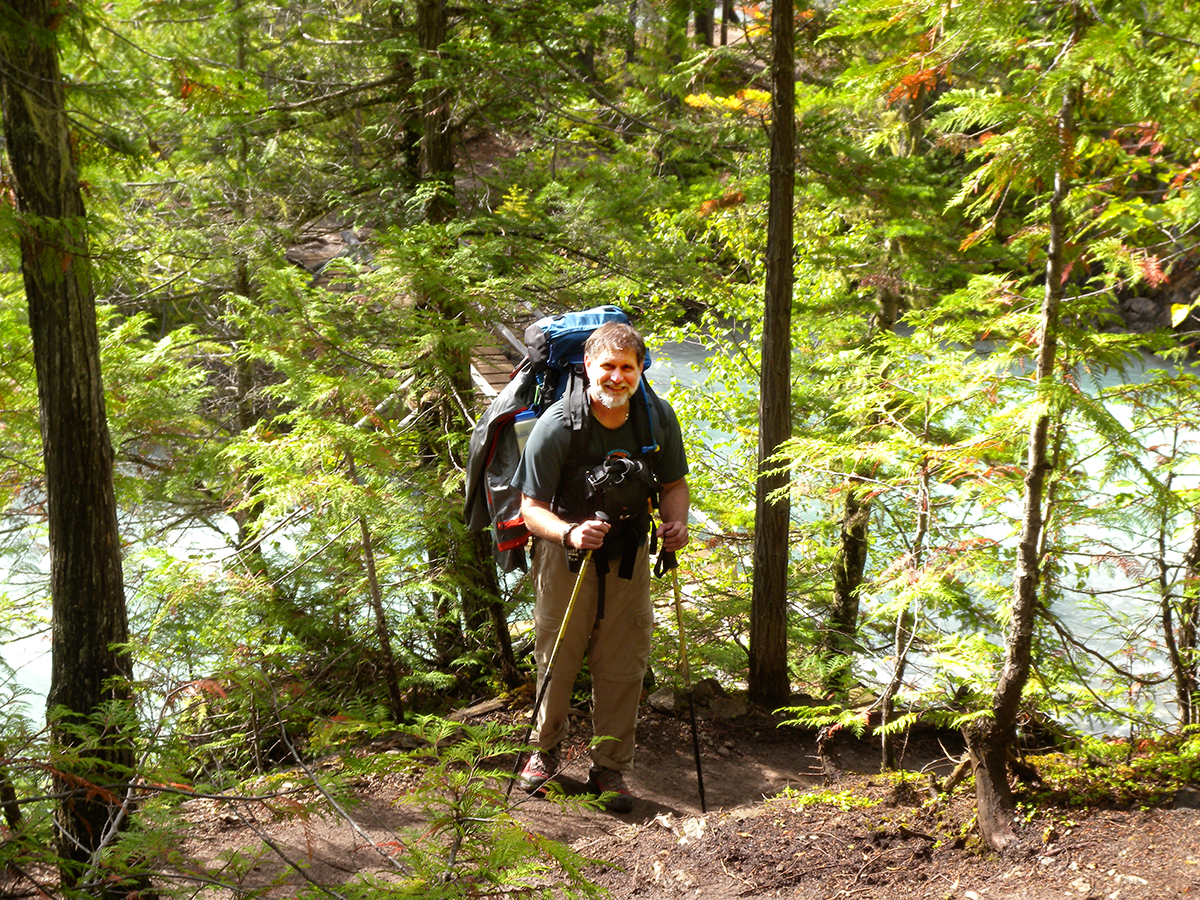 Here’s Fr. Jimmy, as we leave the level of the river and head steeply (steeply, steeply) uphill for the next several hours. 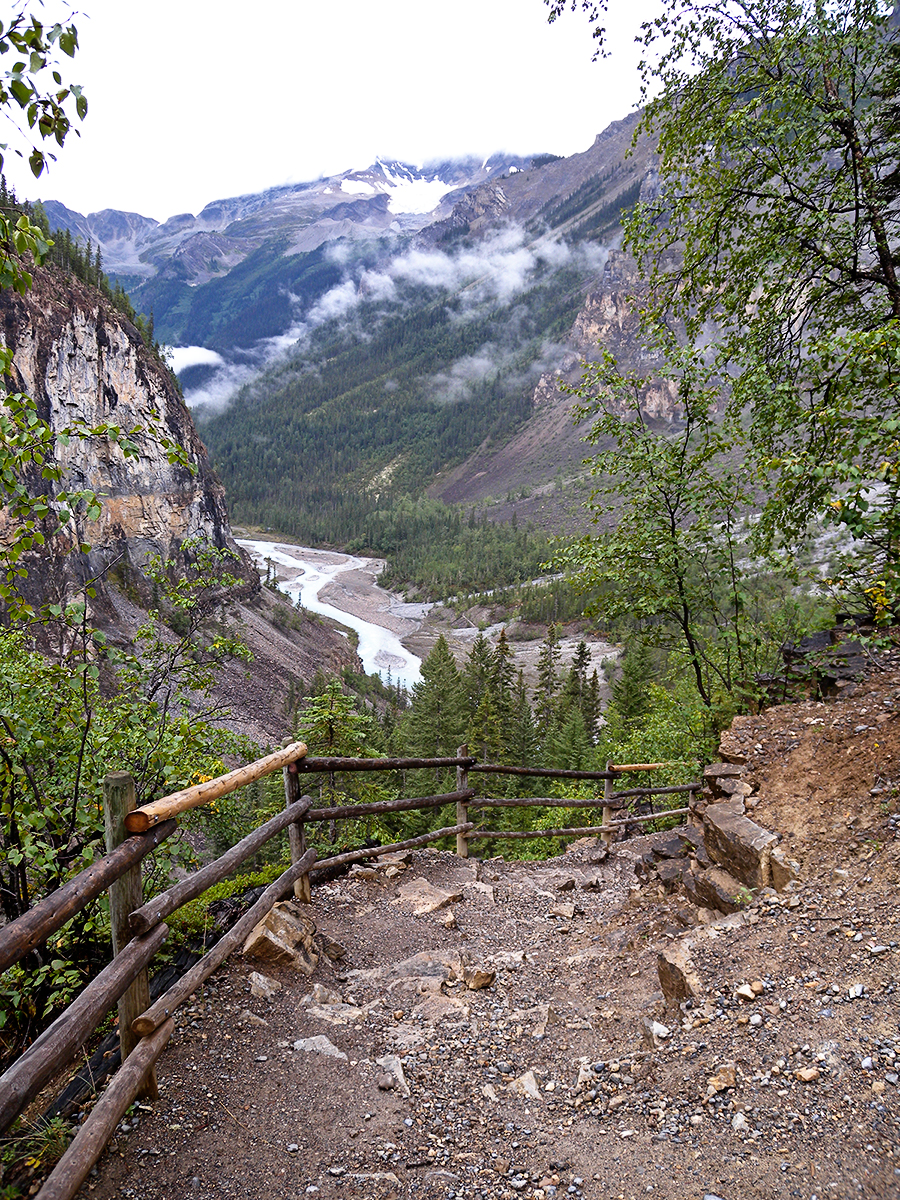 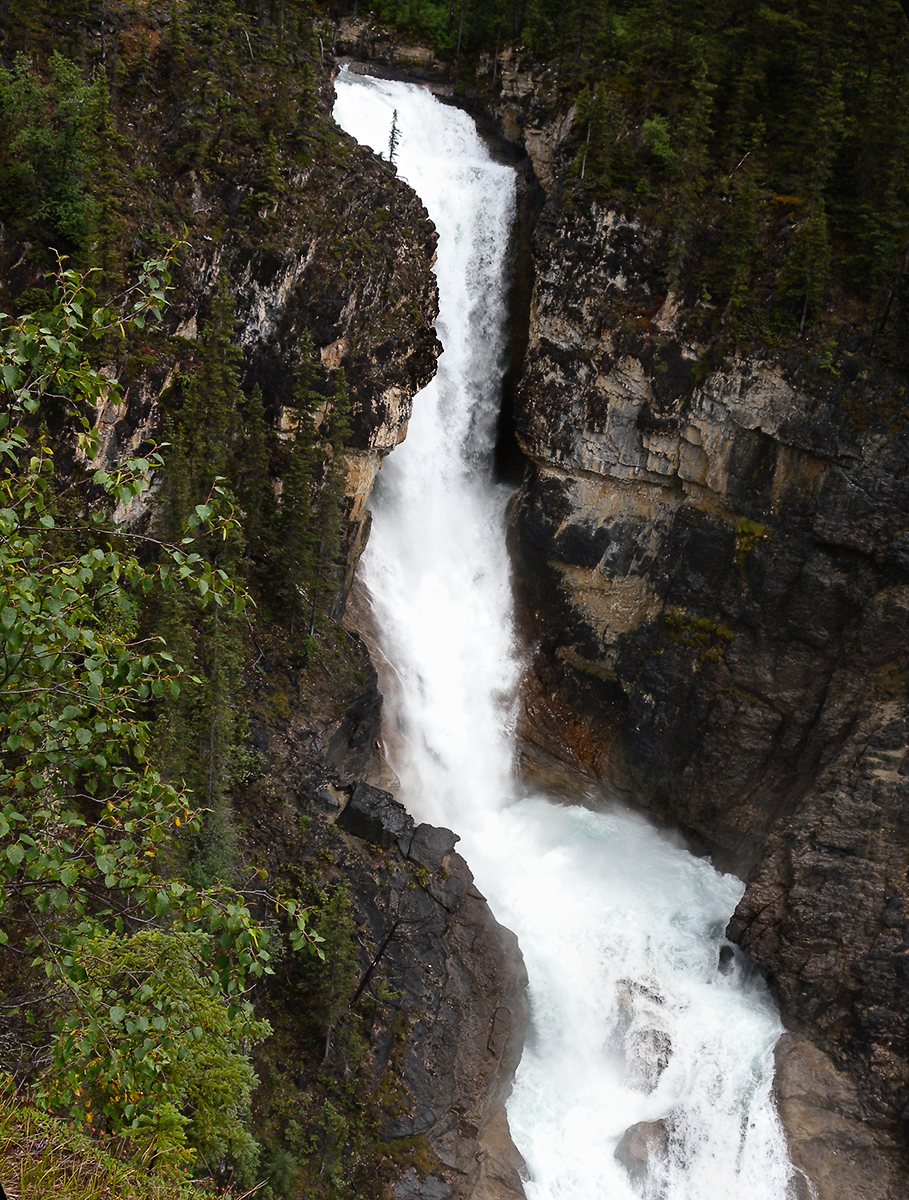 The ledge is built to provide glimpses of the Falls of the Pool, (or Pool of the Falls? I’ve forgotten!) But the point is, the falls spill into a pool, then run out and head down over to the river to join in the rapids flowing past the campground and down out to the beginning of the trail. It’s all about the pool, here.

We met several people here. On the way down we chatted with a Spanish woman who was hiking up to Berg Lake with her elderly parents, in from Spain. They were evidently doing a 12 mile day hike, with a base camp set up at Whitehorn, which is a popular way to do the upper trail. Also on the way down a few days later, a marathon runner passed us up. He was running the entire trail in a day, up and down, in anticipation of a yearly marathon which is held on the trail.

All of these things gave me courage to just keep walking, man. 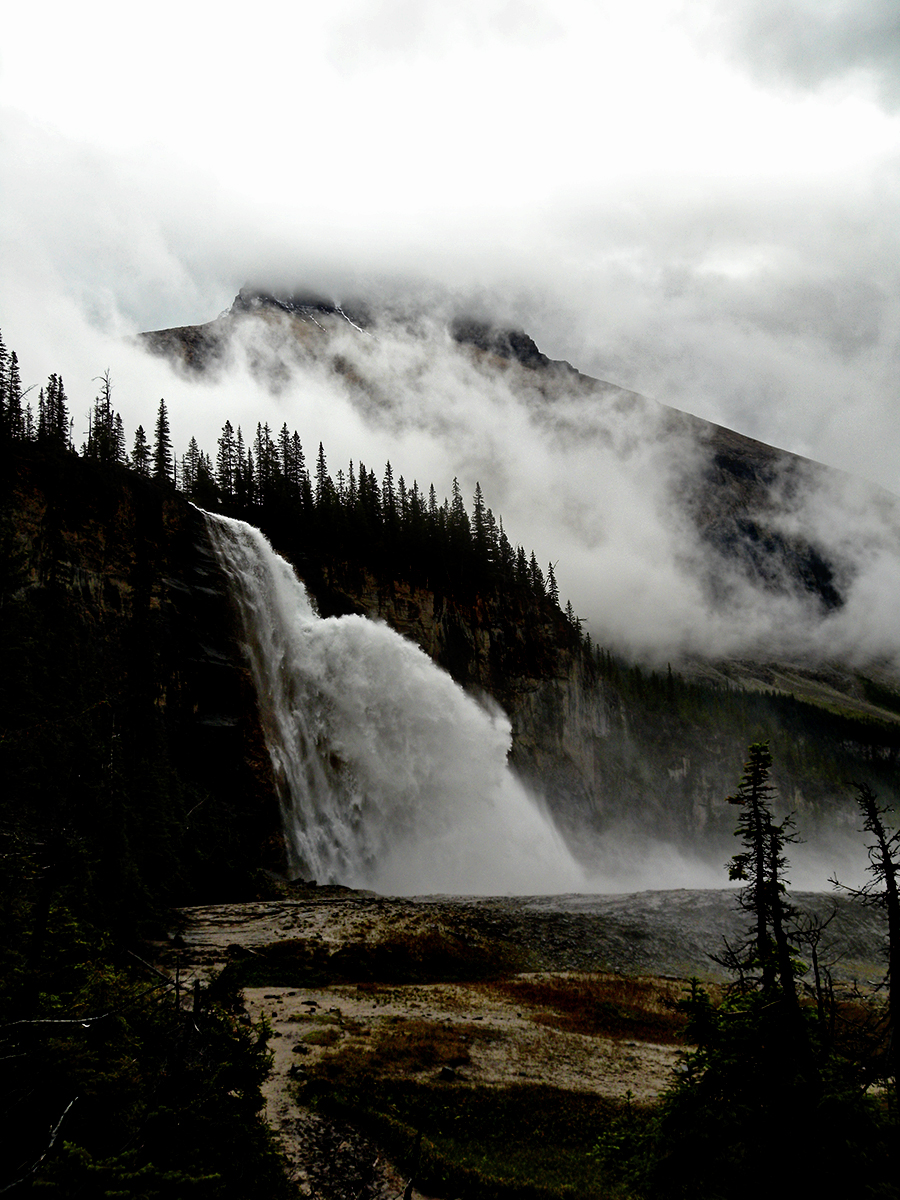 A short eternity later, you and your backpack are up near the beautiful, famed Emporer Falls. Although this is well worth walking up to and taking a good look-see, it will also manage to get you soaked with spray if the wind is blowing in your direction. Hiker discretion is advised. 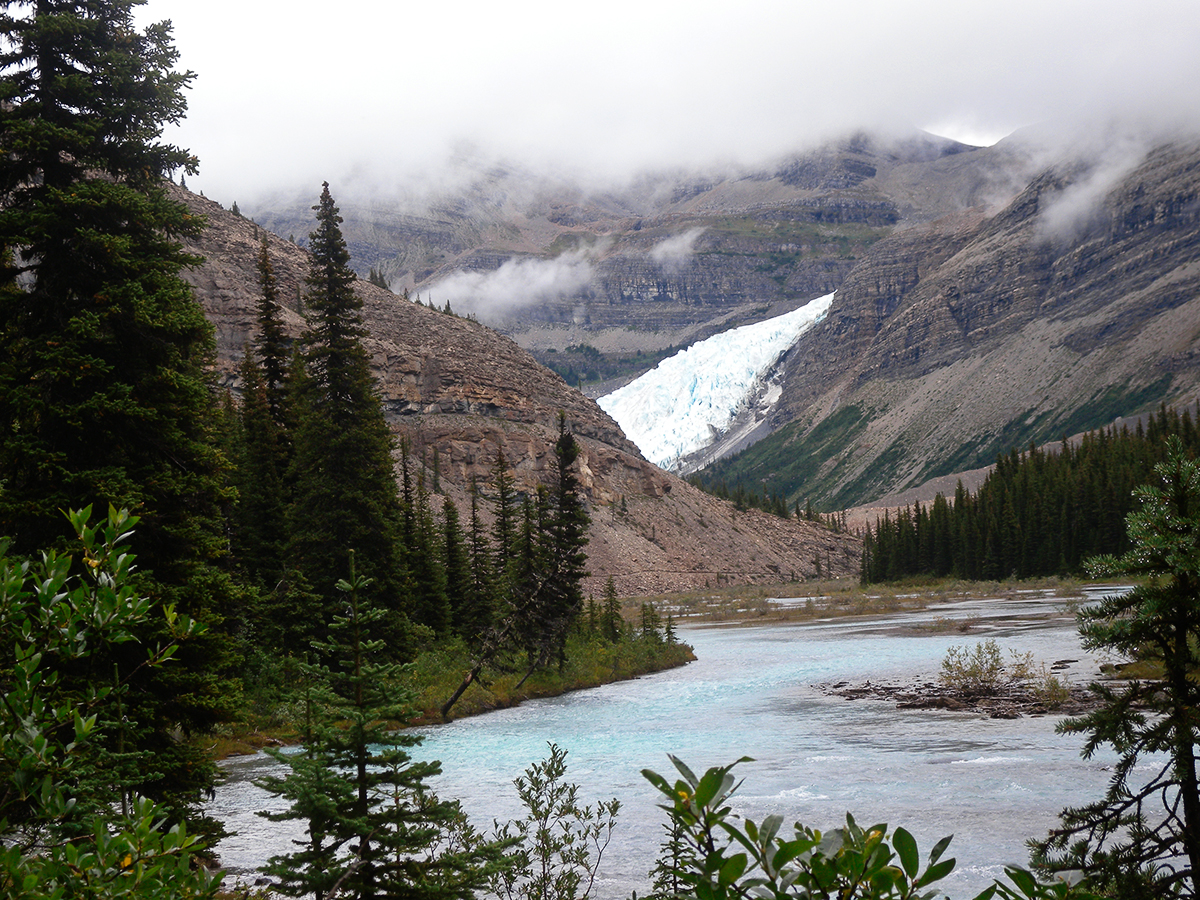 And then you hike up a bit more, just long enough to get exasperated, and the entire path levels out. The Emporer Falls campsite looks beautiful to camp in. You walk on and on and eventually, catch your first sight of Berg Lake and it’s famed glacier, which groans and calves before your very eyes.

But more on that later.