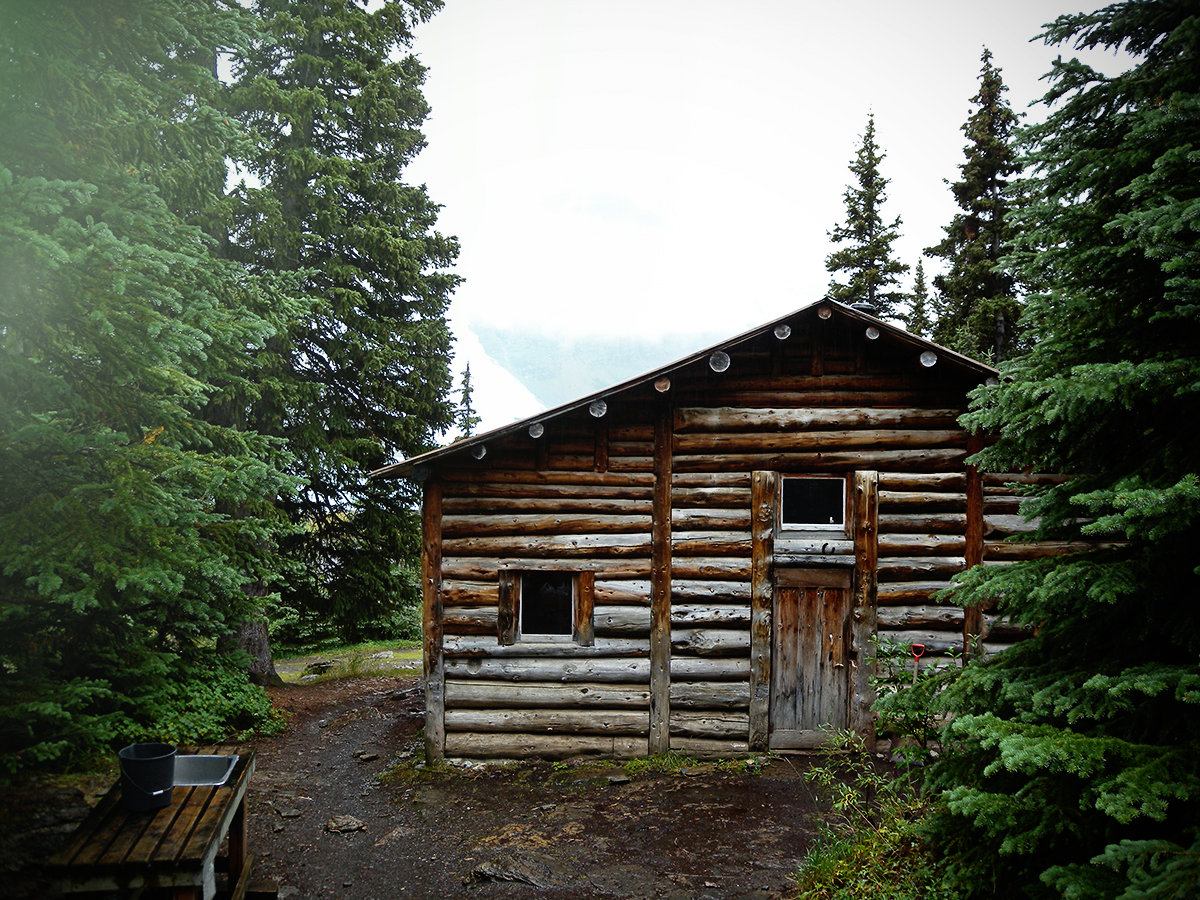 Not that it’s much of a story… But this is the hut and dishwashing area up at the Berg Lake campground.  It’s actually the back of the hut, and I was usually hesitant to walk in through this door due to the rain and mud, but it turned out to be no big deal.  The inside of the shelter stays pretty dry because everyone is taking care not to get it all wet and muddy. That and you walk in right by the wood burning stove, which dries things out pretty fast.

And it is THE place to hang all of your wet clothes to dry out.  The assorted batch in this view is from the previous night.  At this point many hikers were still heading back in the rain, cold and mist.  And soon this area was completely filled with drying clothes as a warm fire was built in the wood burning stove (which is just outside of the range of this picture!) 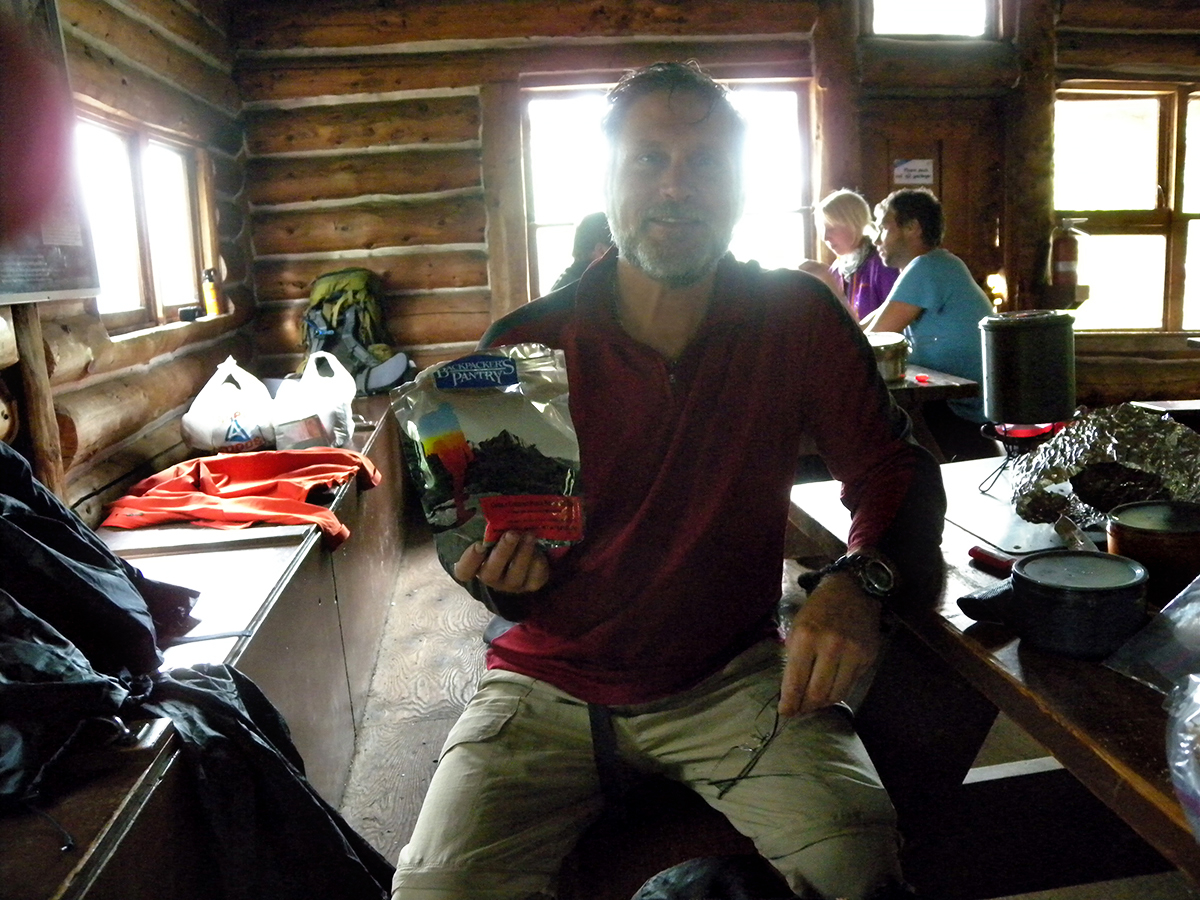 And here’s Fr. Jimmy holding up tonight’s dinner!  It was a freeze dried extravaganza, and every meal was delicious.  While that’s partly due to the fact that almost any meal tastes good on the trail (with some notable exceptions….), it also has to do with the fact that freeze dried meals have come a long way in the last decade.  A lot of them just taste fantastic. And this coconut Cuban rice thing hit the spot after the freezing cold rain fest over at the glacier earlier in the day. 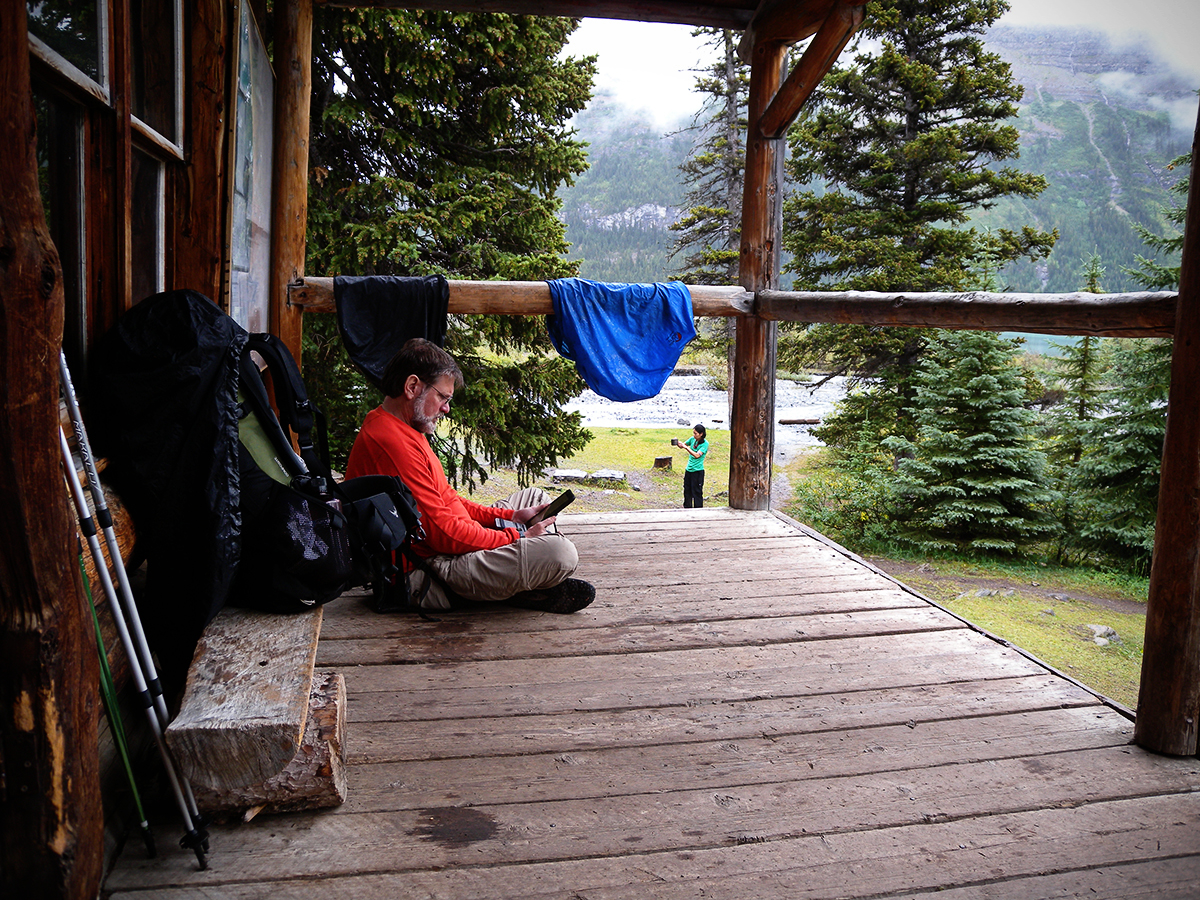 Fr. Jimmy is convinced he is an introvert.  I’m not quite convinced of that, as he is so out going and popular on the trail. But he does read a lot, and needs his alone time.

The woman in the background is measuring water for dinner.  In this Shangri-La of a campsite, you can literally just walk to the edge of the lawn and dip your container into the clear, briskly flowing stream for water.  It was beautiful. Many campers especially the Canadians, do that alone.  But we southerners, jaded by the muddy Mississippi and the Gulf Oil Spill no doubt, used Steripens if we weren’t cooking with it. 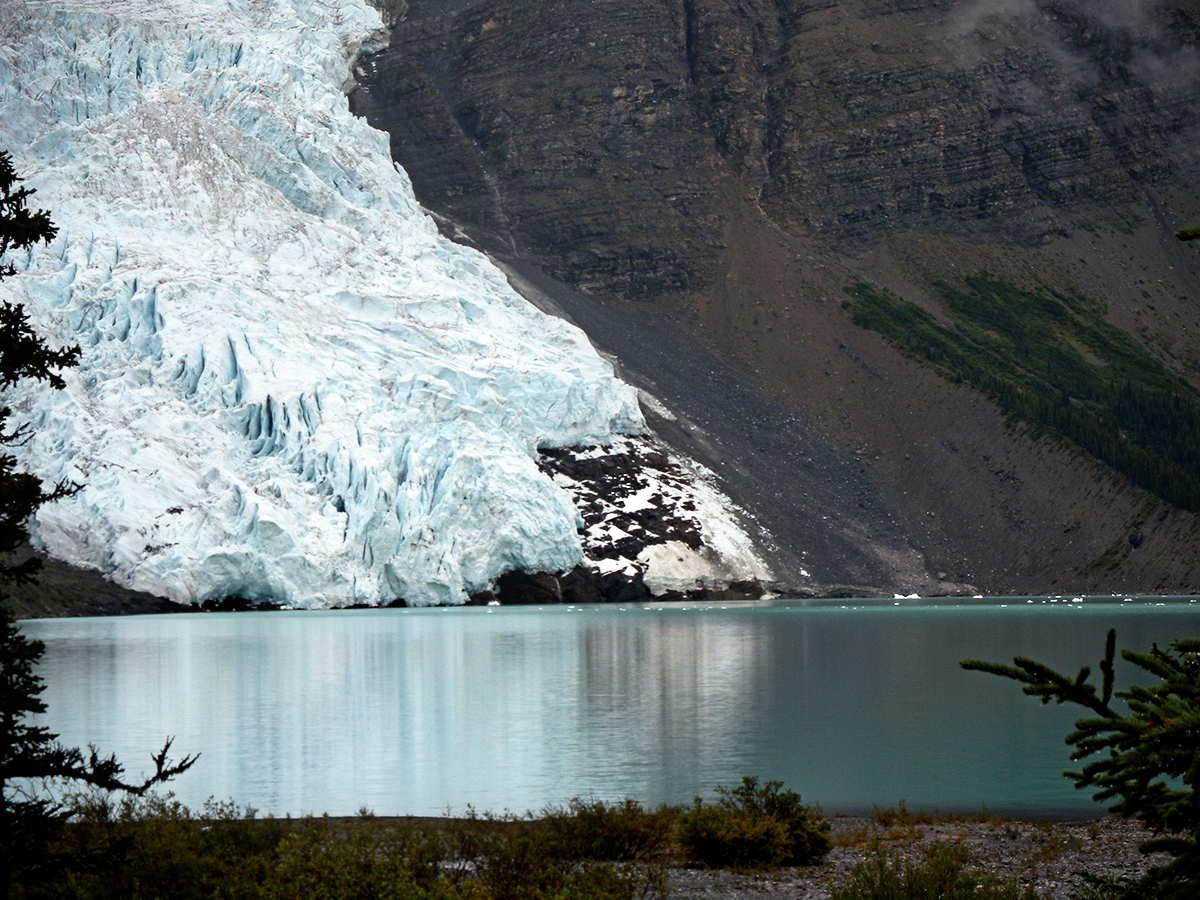 The glacier makes huge groaning noises throughout the day and night, which are often mistaken for thunder.  While we were looking at it the evening prior to this, a chunk fell off into the lake while we oohed and aah’d in complete wonder.  It looked like a puff of snow falling gently into the lake.

A few seconds later there was a huge boom, which was the delayed sound reaching us … truly amazing!

But later that night, as the soft rain fell, the glacier groaned for what seemed several minutes, with a terrific rumbling sound as well.  Some campers saw large chunks of ice fall into the water, and the ranger who passed by the next morning called it a “significant event”.

That led me to use the term “significant event” throughout the day, to anyone and everyone who commented upon the amount of ice in the lake.

It was a significant event.

A significant event I tell you.  The Ranger said so. 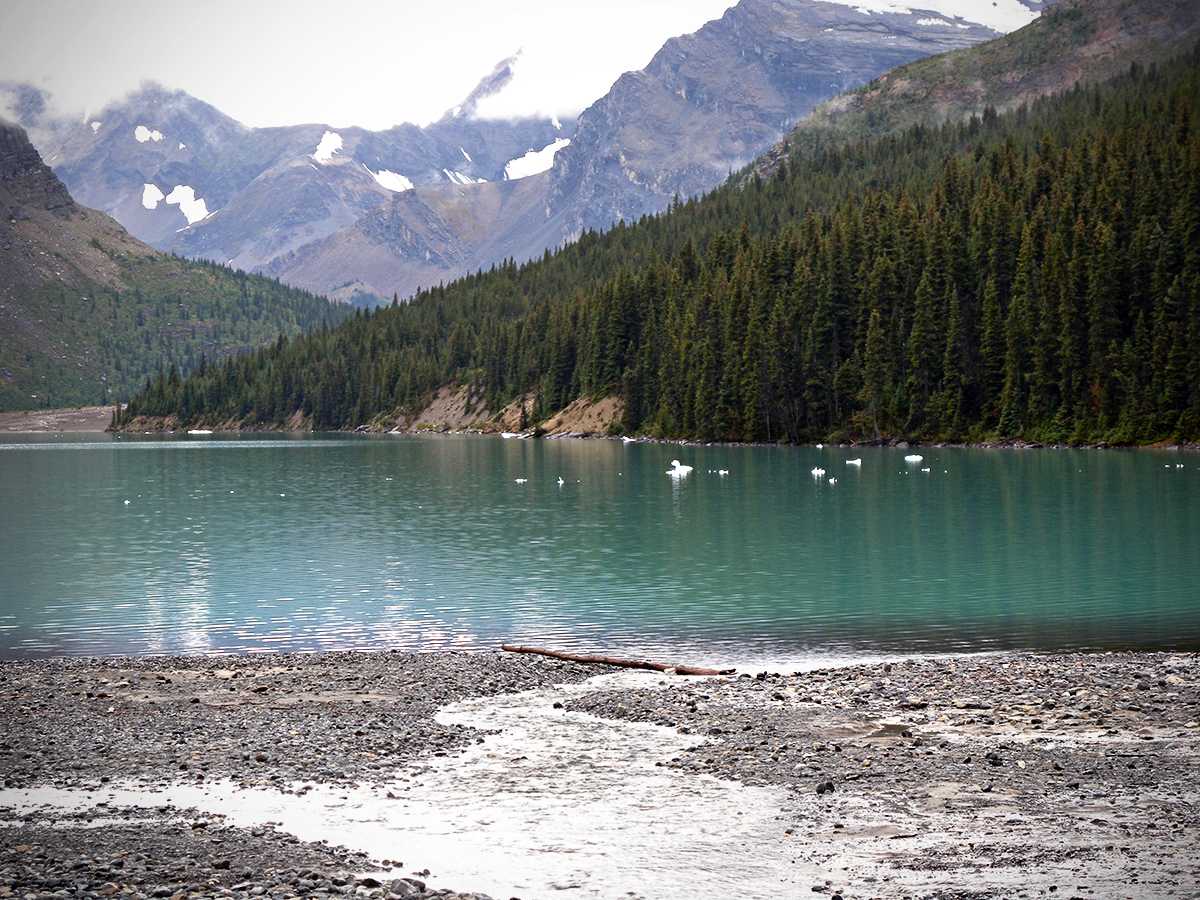 And the lake was filled with a significant amount of ice.  But these small ice bergs are what give the lake it’s name, after all. 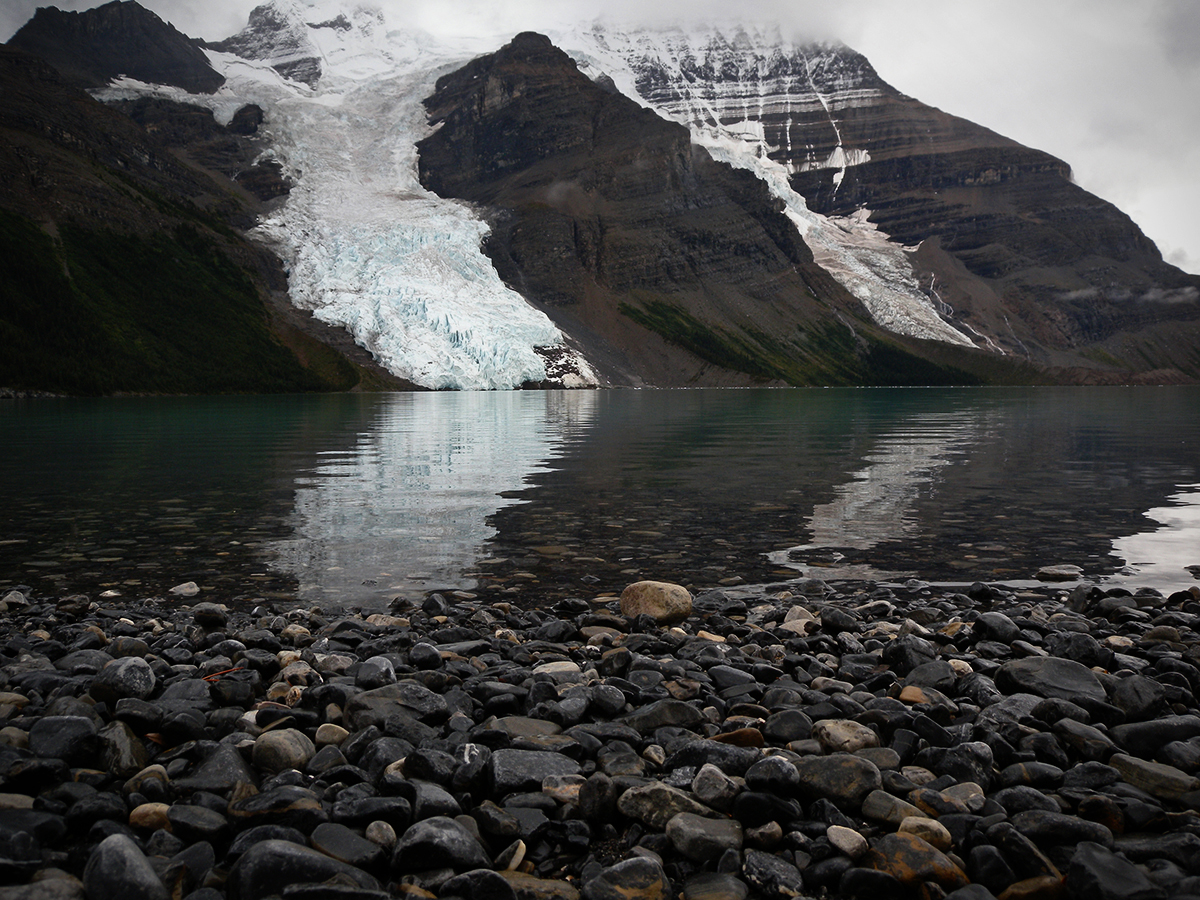 Which for whatever reason led me to try artistic shots with my little Nikon Coolpix. And at the base of the mountain and the glacier, you can make out a significant line of ice. 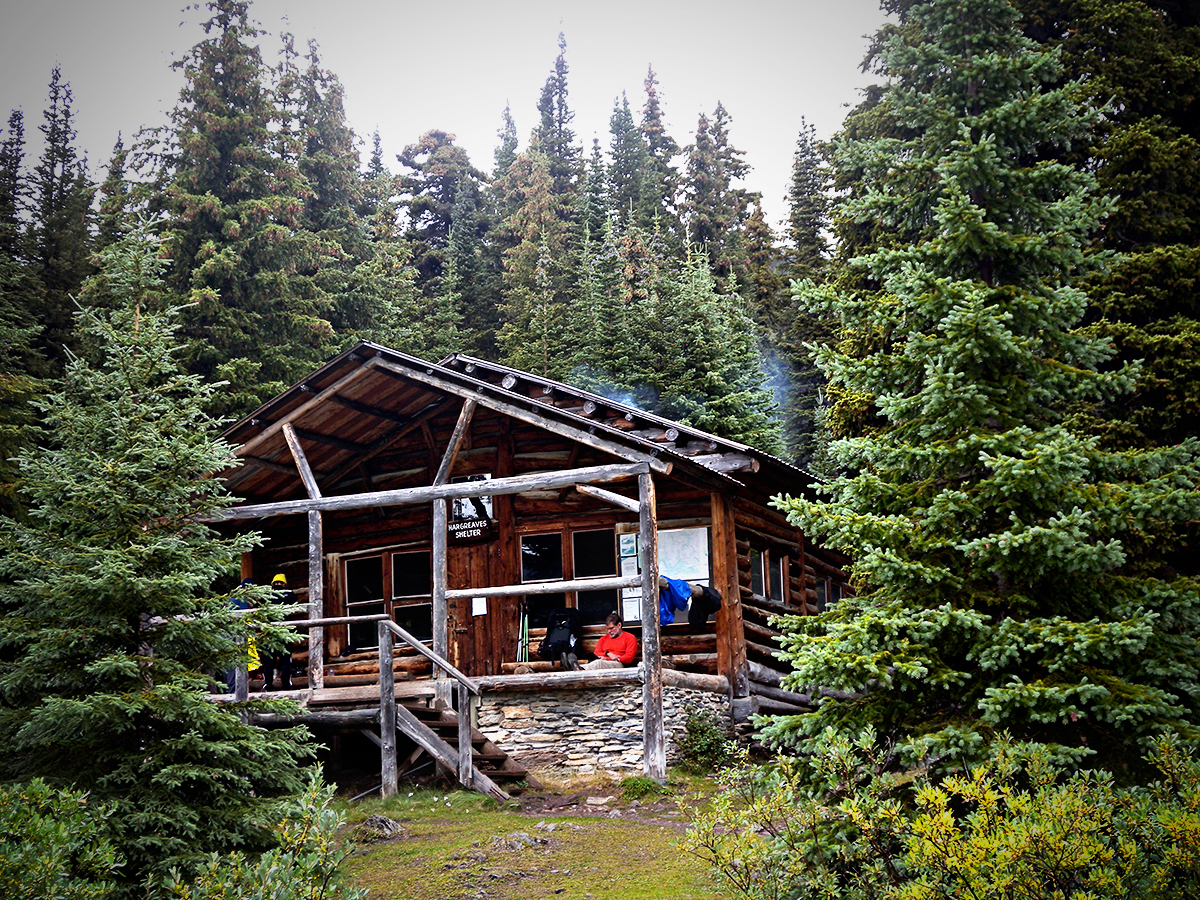 Despite the ongoing rain and mist and fog and the damp and the cold, (I kept trying to explain to the Canadians that  this was like winter in New Orleans…) the shelter remained a haven of warmth and dryness.  The wood burning stove inside was kept well tended, and people were hanging clothes out to dry until there was barely any room left, and one had to search high and low for an extra inch of hang space.

And speaking of dry, the Marmot Limelight 3p tent kept us high, dry and warm throughout this wet and rainy first week of backpacking and hiking.  I was initially concerned about it’s weight, but between two relatively large men, (one of which there is nothing relative in the least about largeness… I am just a big guy,) the weight was entirely manageable, and the tent roomy enough so that you almost don’t even remember there’s another person in the tent at times. 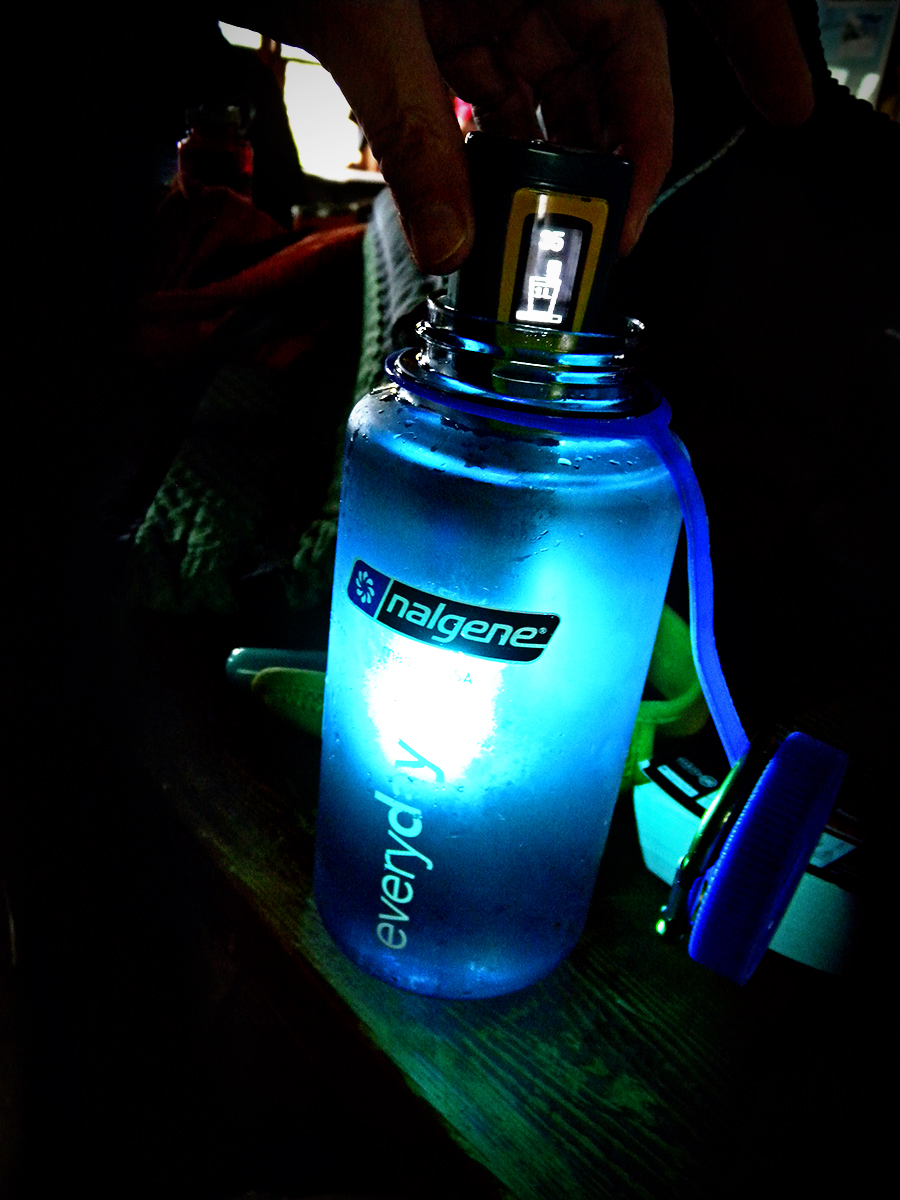 The Steripen Ultra, in action. 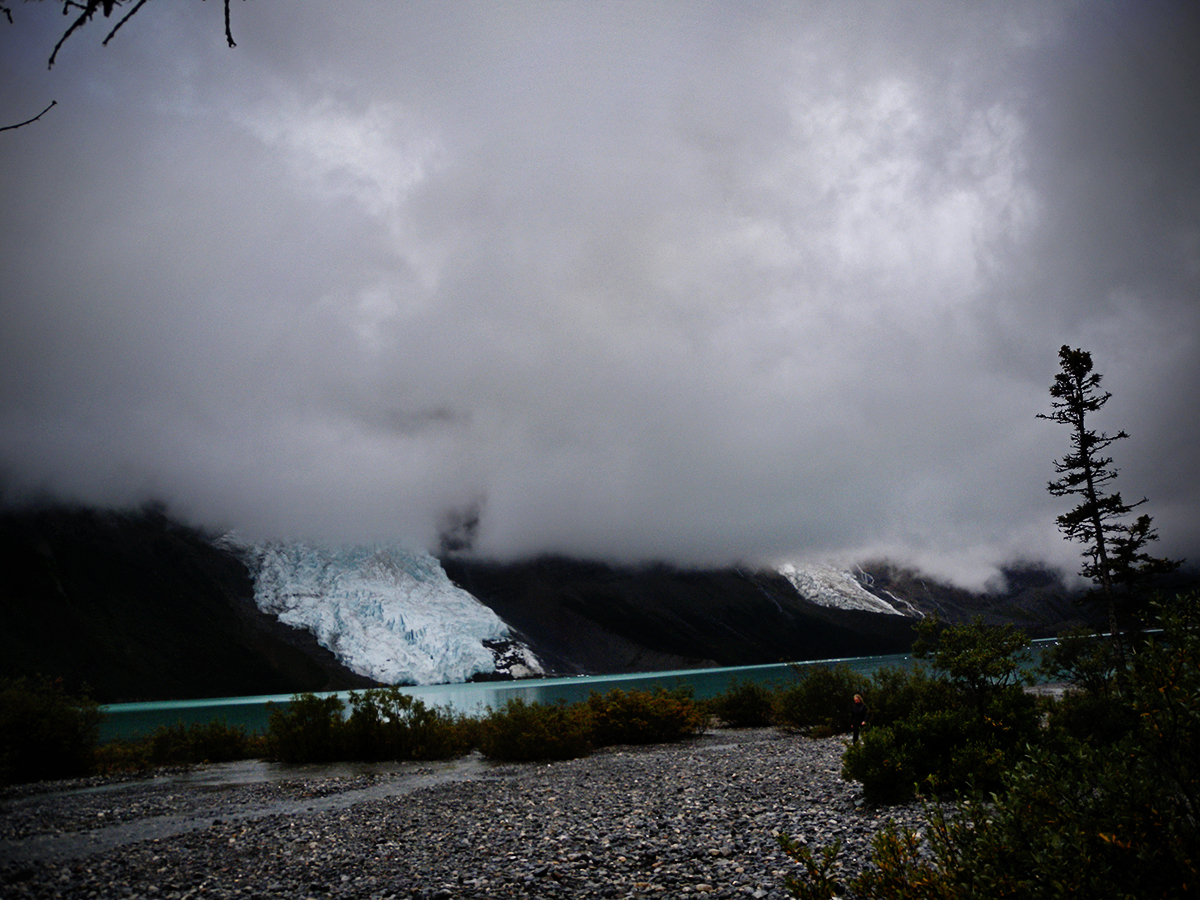 Low lying clouds scudding by in the evening light. 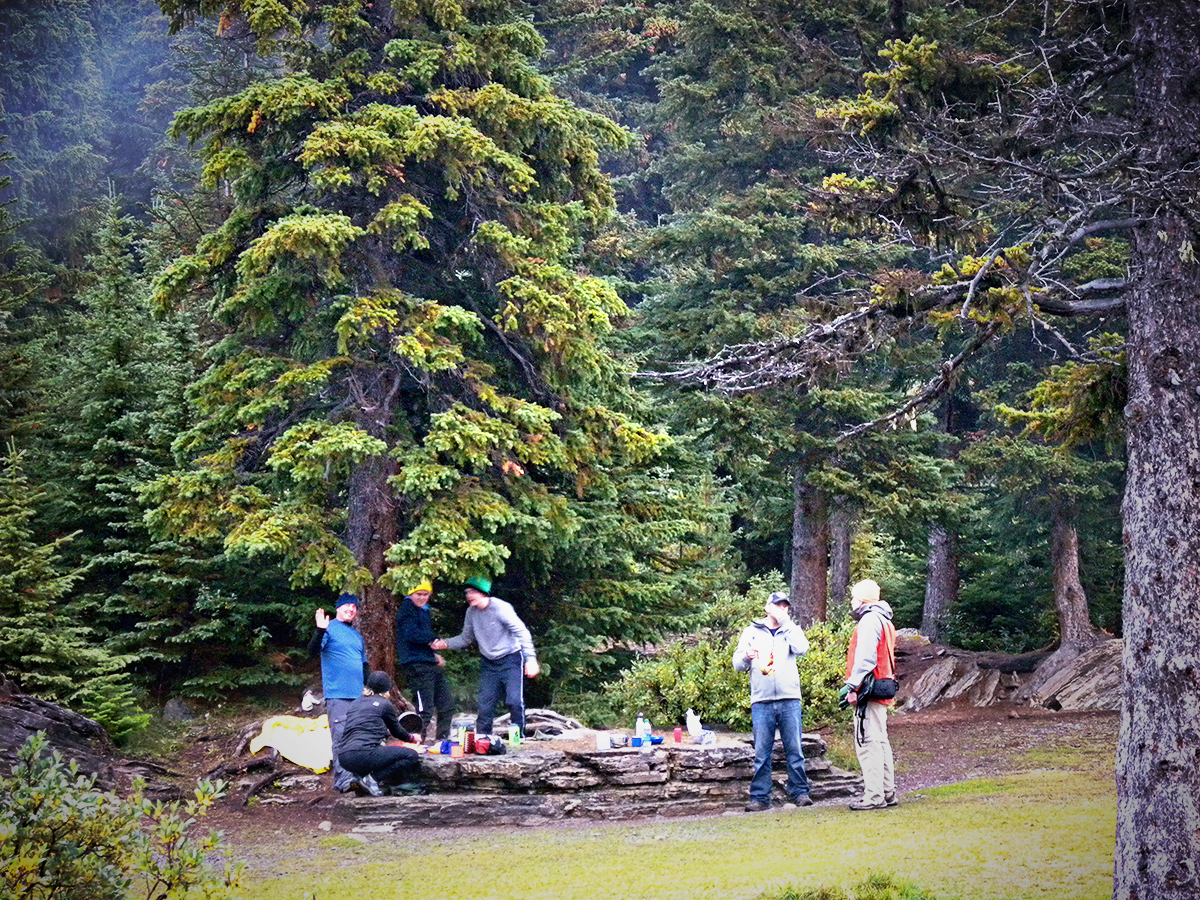 A Canadian Stand Around.  Bob and his family were celebrating some major birthdays by taking some trail time together then hitting Jasper over the weekend. The amount of families on the trail was both amazing and inspiring. 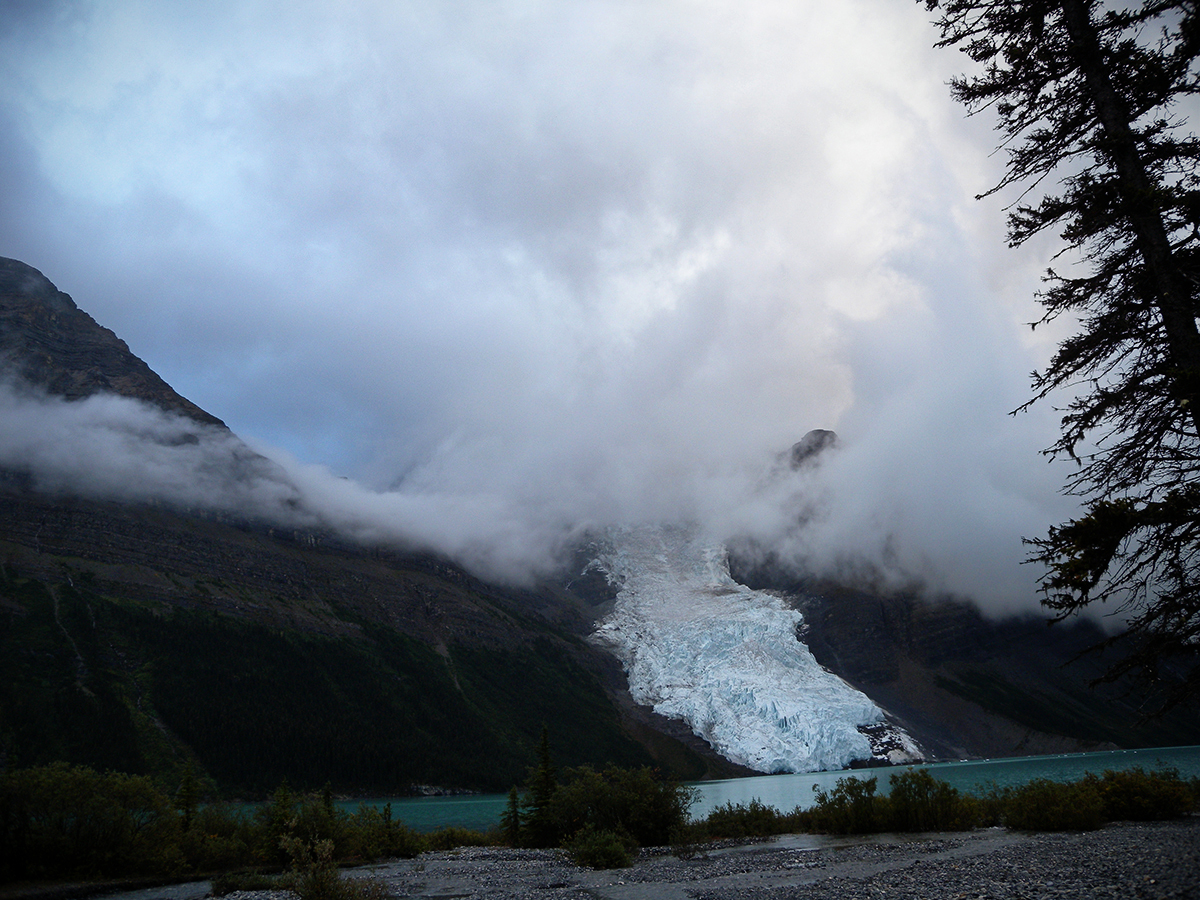 Cloudy Mist, with a glint of twilight, begging to be photographed. 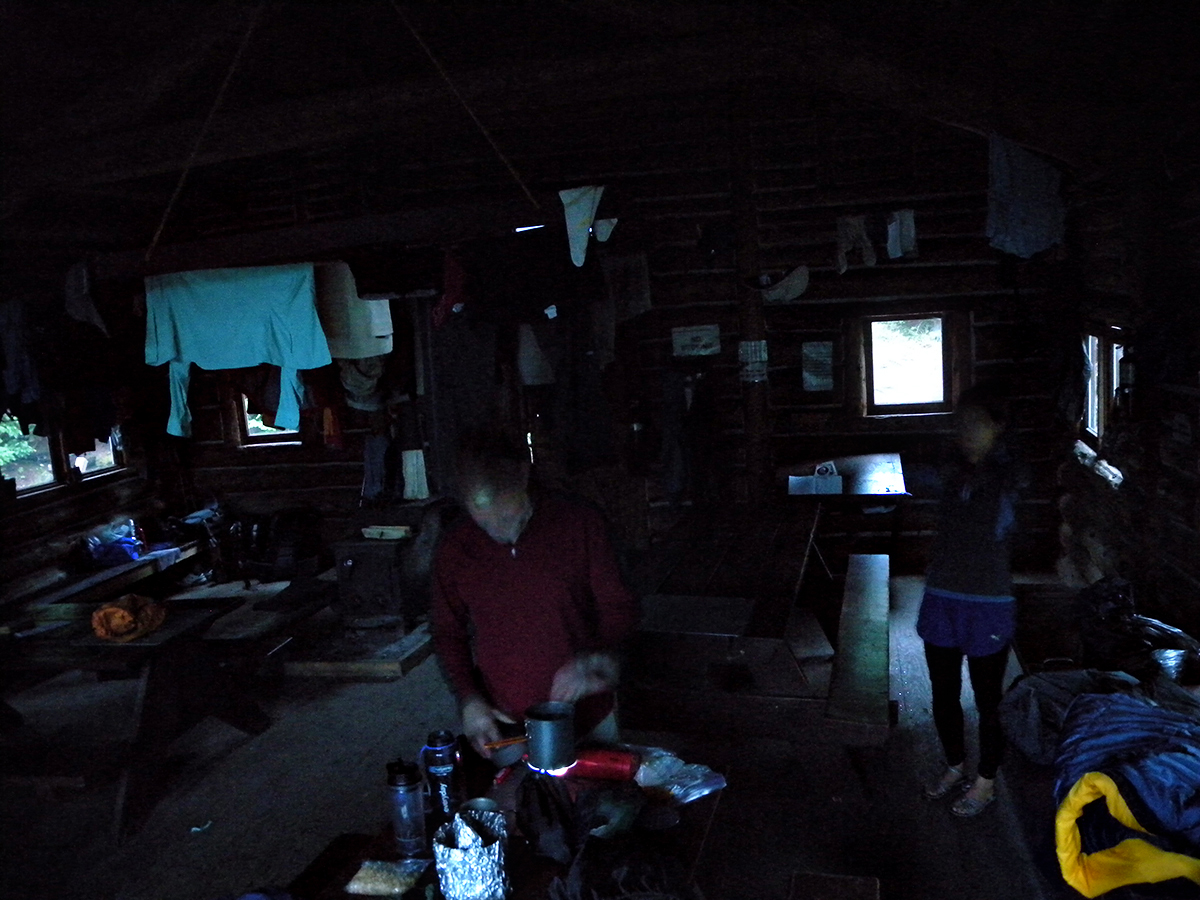 We fixed breakfast inside the shelter the next morning as we prepared to leave.  Despite the heights of complexity and deliciousness that freeze dried meals have obtained,  we stuck to a fairly penitential breakfast regimen of gruel … granola with hot water added, and coffee.

And actually we  just brought all of our gear up to the shelter to pack it up since we were leaving fairly early and it was starting to rain. Again. 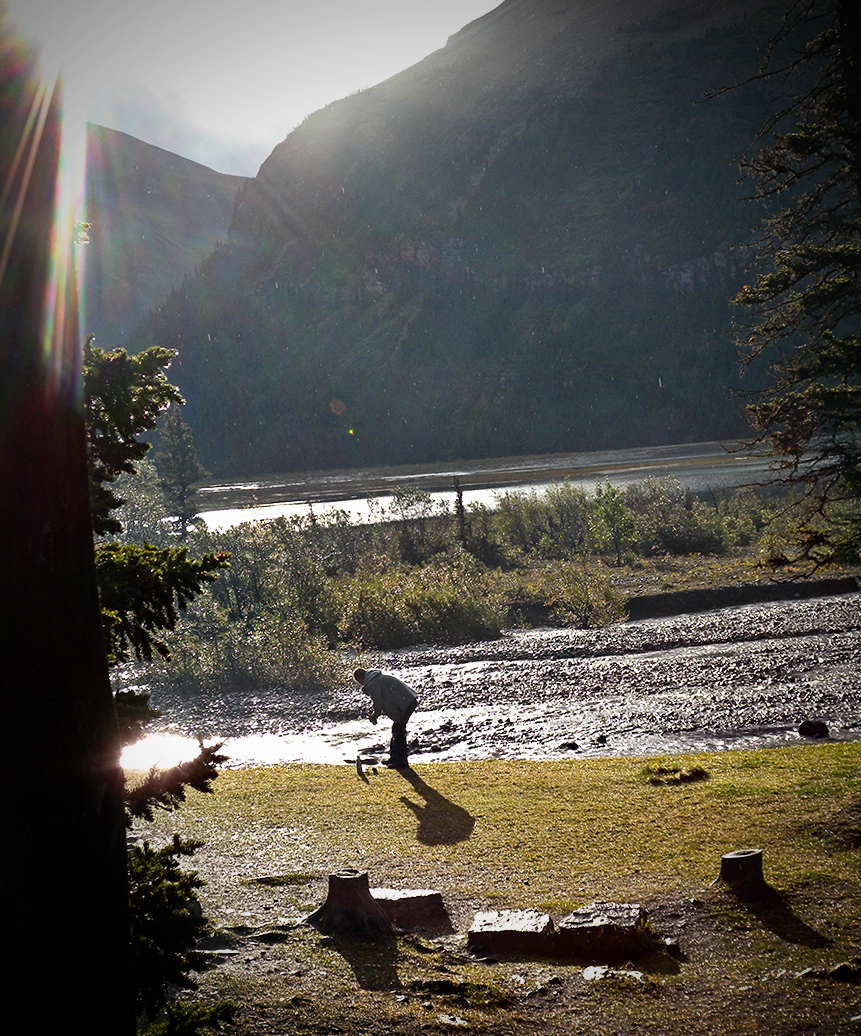 But then the sun came out and everyone shouted Hallelujah!  Bradley showed up and fetched some water during this brief appearance of the sun.  And from the looks of this picture, my little Nikon didn’t know how to respond to the sudden appearance of sunlight. Especially with random raindrops falling… 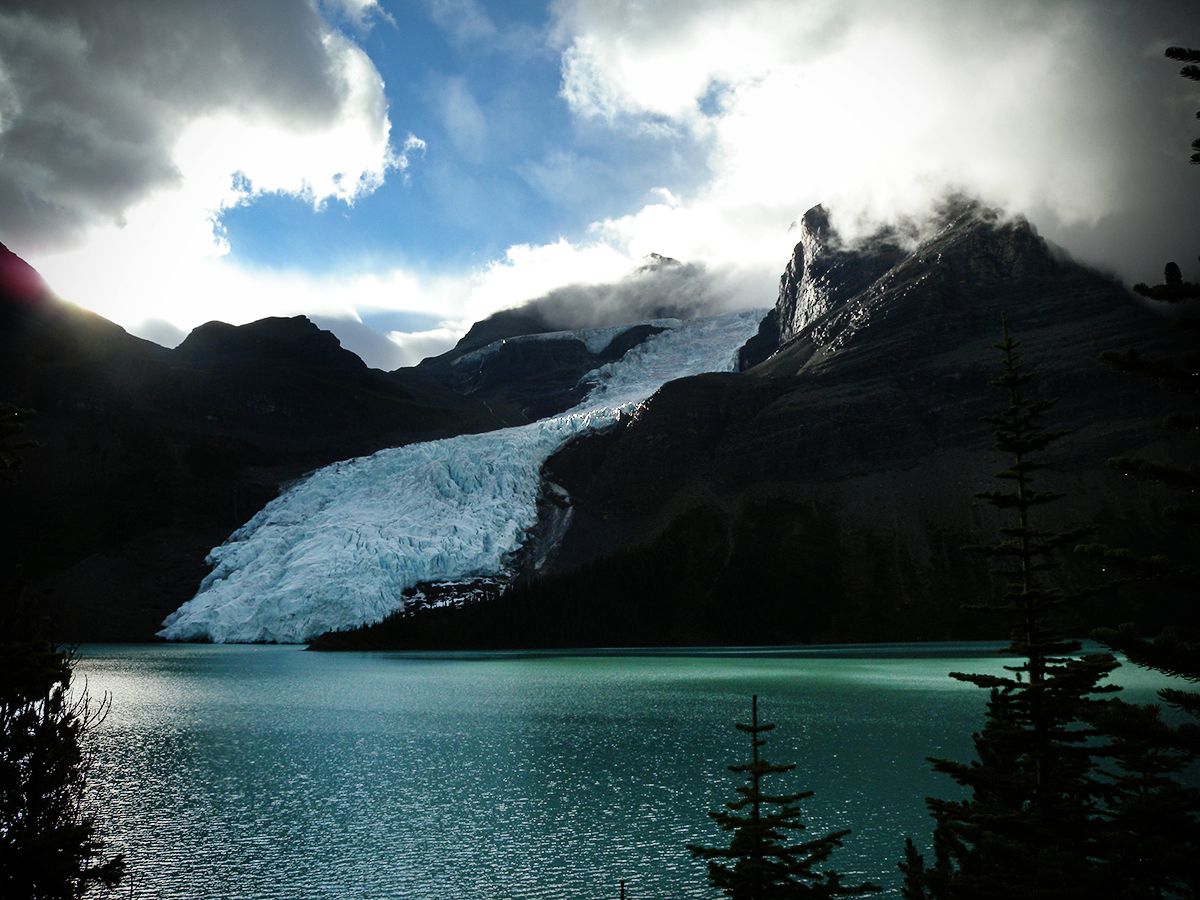 The walk out was as beautiful as the walk in… shrouded in glory. 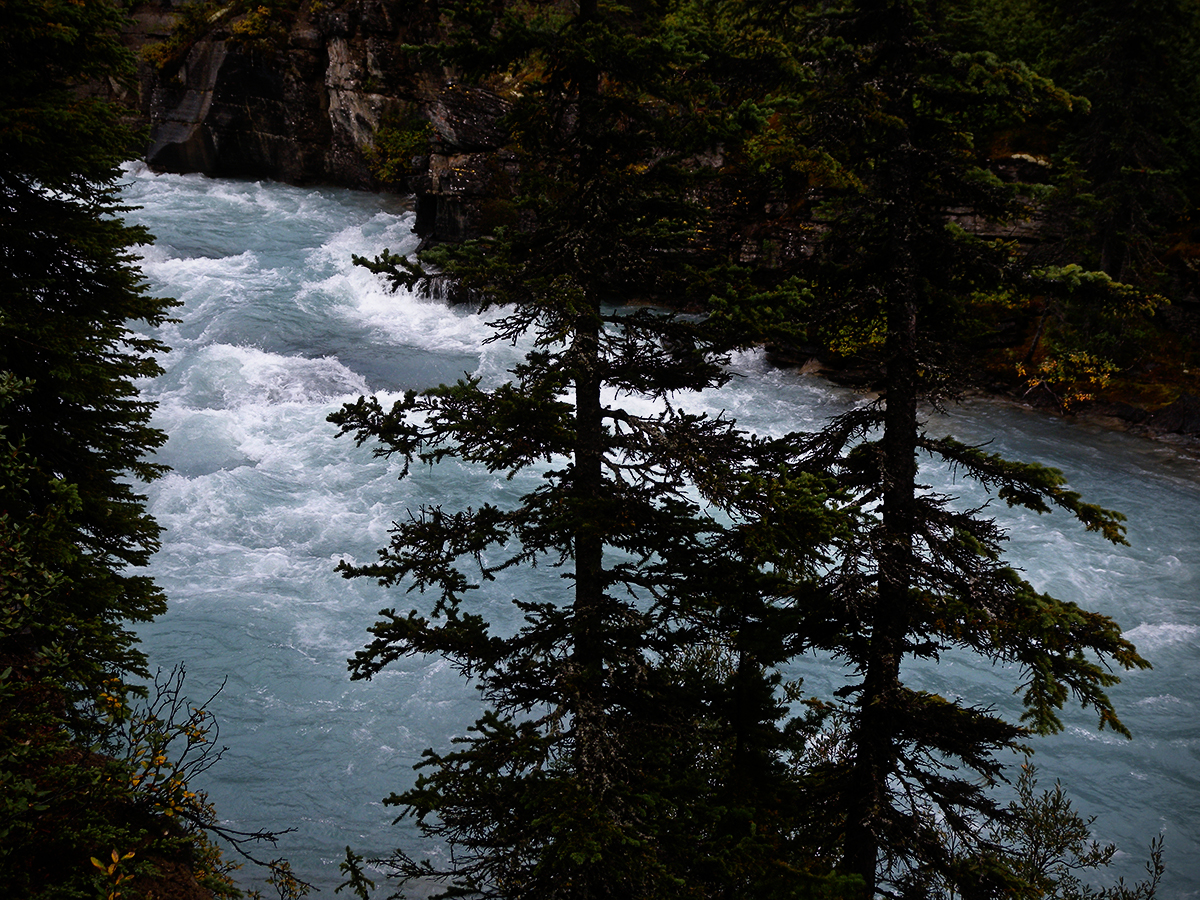 Between the last picture and this one, a huge rain squall erupted, with cold winds blowing at what must have been at least Tropical Storm force.  We had to lean into the wind, and the rain hit us in the face, feeling like sleet or, at times, hail.  I felt like I was in a National Geographic special.   Fr. Jimmy noted, over the wind, that this was the back country at it’s roughest.

At the height of this storm, a man and woman walked around a bend with packs on, holding an umbrella impossibly against the wind and the rain.  It was absurd and yet somehow delightful.  It reminded me what I had come to love about the Berg Lake Trail in these few short days… that everything and everyone on it was so unique and so strange and so beautiful.

After a few moments, we descended off of the plain and began the intense 4K descent back to Whitehorn and the rest of the trail out.   The weather cleared, and we stopped and prayed morning prayer, giving thanks for such a beautiful and wonderful stay at Berg Lake.