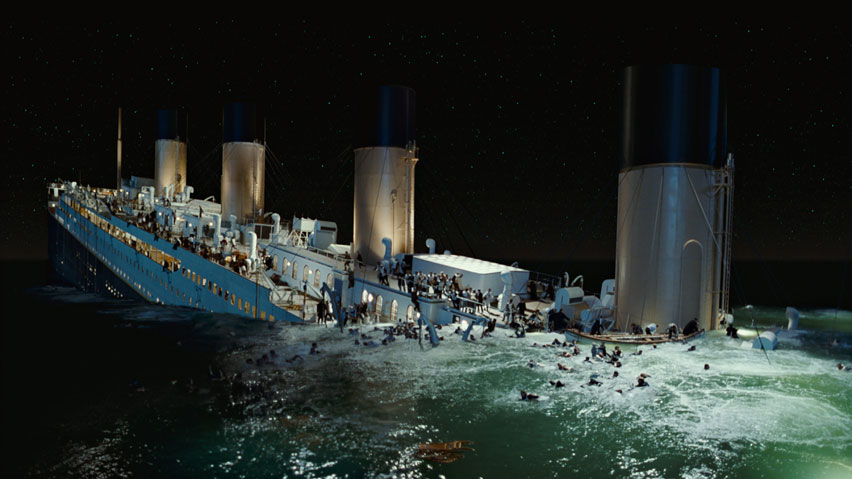 A few weeks ago, on a rainy day which I had free, and which I freely took as my own to exercise, catch up on work and in general be very productive, I found myself spending my free time watching Titanic sinking videos on YouTube.

A. I’ve always had a fascination for the story of the Titanic, in all it’s horridness.
B. Its an event which changed history. The naive trust was gone from that generation,and medicinal actions were taken to help ensure the safety of future oceanic passages.
C. When things fall apart, they fall apart quickly, despite any warnings.

Anyway, me being me, I got completely absorbed (once again) in Titanic-mania, and watched almost every YouTube video available on the Titanic. You really should look them up if you’re interested in the story. While I don’t have all day to sit around watching YouTube vids, in my free time I’ve seen a number of them, and they are amazing.

I ended up buying a book called “Titanic at Two A.M.: An Illustrated Narrative with Survivor Accounts“. It’s fascinating for history or Titanic buffs. It describes in detail the last twenty minutes of the doomed liner, based entirely on testimony from the hearings in both the U.S.A. Senate, and in the British Board of Inquiry.

What actually happened is different than what you see in the movies. Somewhat, and far more horrible.

What struck me most is that many of the passengers who remained on board, the 1500 souls — many of whom were quite content to continue thinking that the ship would settle into a half sunken/unsinkable state, and that a rescue party would save them — were quite content to continue thinking that everything would go as planned, that everything would be fine, and that all would be well.

Until the last twenty minutes.

Then, all hell broke loose, and catastrophe after catastrophe happened. All in 20 minutes.

Point being, looking around at the world today, one can’t help but notice a great sense of complacency. Christian martyrs? Eh.. Growing terror threats? Whatever…

When bad things happen, they usually happen suddenly and without notice, despite all the warning signs.

And when justification happens, justification in the ways of God, it happens according to His will. Our own arrogance experiences friction with the Holiness of God, and we are somehow surprised that our ignorance, arrogance and super-humanity is somehow violated but the very laws of nature, let alone the laws of the Lord.

The best, by the way, and far more interesting than the movie “Titanic”, (sorry, the love story has gotten on my nerves, and the constant shouting of “Jack! Rose!” and “Jack! Rose!” is… well, I can say that I do like the movie overall,) is the documentary “Inside the Titanic”:

Also, this resulted in the watching of several YouTube videos of the Titanic sinking, set to the tune of “Sleeping Sun”, by Nightwish, three of which are listed below. I’m not quite sure that the lyrics fit with the actual happenings, but still it somehow works. The tune is also used in videos of other famous sinkings, such as the Olympic and the Brittanic.

The female vocalist in the group changed at some point, and I’m not sure if the difference in the sound of the voice here is due to the change or technique. But… whatever. Life beckons.

If you’re fascinated with all things Titanic, then these are of interest. If not, well, here they are anyway.

May the souls of the Faithful, through the mercy of God, rest in peace.