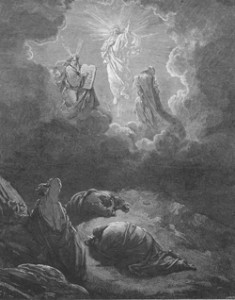 And he was transfigured before them,
and his clothes became dazzling white,
such as no fuller on earth could bleach them.
Then Elijah appeared to them along with Moses,
and they were conversing with Jesus.
Then Peter said to Jesus in reply,
“Rabbi, it is good that we are here!
Let us make three tents:
one for you, one for Moses, and one for Elijah.”
He hardly knew what to say, they were so terrified.

I love this example of Peter’s humility and his disastrous sense of how to act in public. It’s so human. I mean, haven’t we all said the wrong thing at the wrong time? Or, in the face of some type of greatness haven’t we all put our foot in our mouths?

You just know that this ranks right up there in the all time list of things someone can’t believe they said. And to make matters worse, it’s recorded in Sacred Scripture! Poor guy. 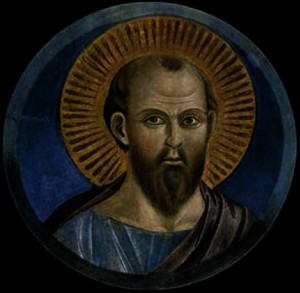 Things certainly changed after the Resurrection though, and the descent of the Holy Spirit. Peter was a new man! Went right out and converted three thousand people, knew all the right things to say.

Lord Jesus, when I’m behaving like an idiot, or when I’m really at a loss for words and don’t know what to do, please send your Holy Spirit upon me to lift me up like Peter. And I understand my prayer is not exactly theologically correct for various reasons, but you know what I mean. That, and I really do apologize for my disastrous attempts at a penitential Friday yesterday. There was nothing penitential about it, and I had a lovely day — but I know we’re called to higher standards in the spiritual life, and I know penitential days are usually even lovelier. I’ll try harder. Amen.

Well, Mardi Gras is finally starting around these parts. Whoo-ee, let’s get this show on the road and get on with things.