The Book of Tobit is a treasure. (Today’s readings rather alarmingly cuts from verses three to sixteen…)   One of my friends was laughing over the story yesterday about bird droppings getting in Tobit’s eyes:

On the night of Pentecost, after I had buried the dead,
I, Tobit, went into my courtyard
to sleep next to the courtyard wall.
My face was uncovered because of the heat.
I did not know there were birds perched on the wall above me,
till their warm droppings settled in my eyes, causing cataracts.

So she retorted: “Where are your charitable deeds now?
Where are your virtuous acts?
See! Your true character is finally showing itself!”

They really are living in horrible times, in the diaspora after the kingdom has fallen. He’s blinded by bird doo, which can only be called unfortunate, and their life becomes a misery. The angel Raphael is sent to help them! And help them he does, eventually being an instrument of God’s healing for poor Tobit’s eyes.

A major point being, they live in horrible times yet they remain faithful. They experience tragedy, drama, the onslaught of evil, yet God finds a miraculous and mysterious way to help them. It’s a very human tale, with humorous moments, insights into the mysteries of Faith, and lessons in living through difficult times.

Tomorrow we backtrack through the Book of Tobit a bit, which makes no sense to me. Can’t we just read the story? If the point is to read through all of Scripture in three years, why chop it up so much? Especially Tobit which not many people read as it is.

And you can tell everyone about the Archangel Raphael, one of only three Archangels found in Scripture, and about the great exorcism prayer that Tobit’s son Tobias(h) prays with his wife before they go to bed on their wedding night. A lot of people should read that prayer because they like to have it at their weddings, but that’s a different story, though no less charming. 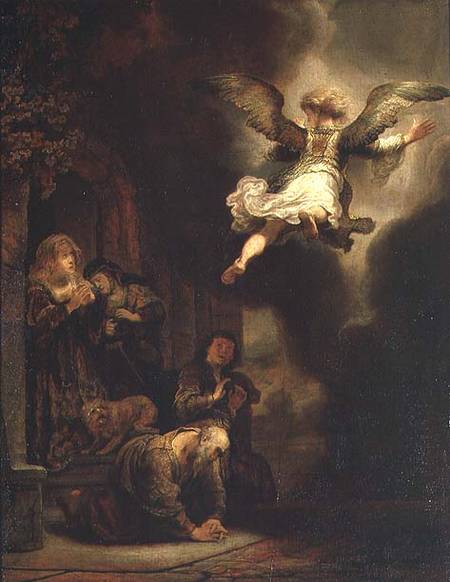 Raphael tells some interesting things about how angels interact. He appears to be human, and they see him eating and walking with them, etc. But he eventually tells right before he leaves them, that what they saw was an illusion, since of course angels are spirits and don’t eat or drink, or really even walk for that matter.

Times may be difficult, but life doesn’t have to be lifeless. There is only life, and God is always reaching out to us in it, often through all the people, things and events of the world  …. seen and unseen.