This actually belongs towards the middle of the entire Canadian Hiking segment. Still, while its a mis-chronicled chronicle, it’s at least here. 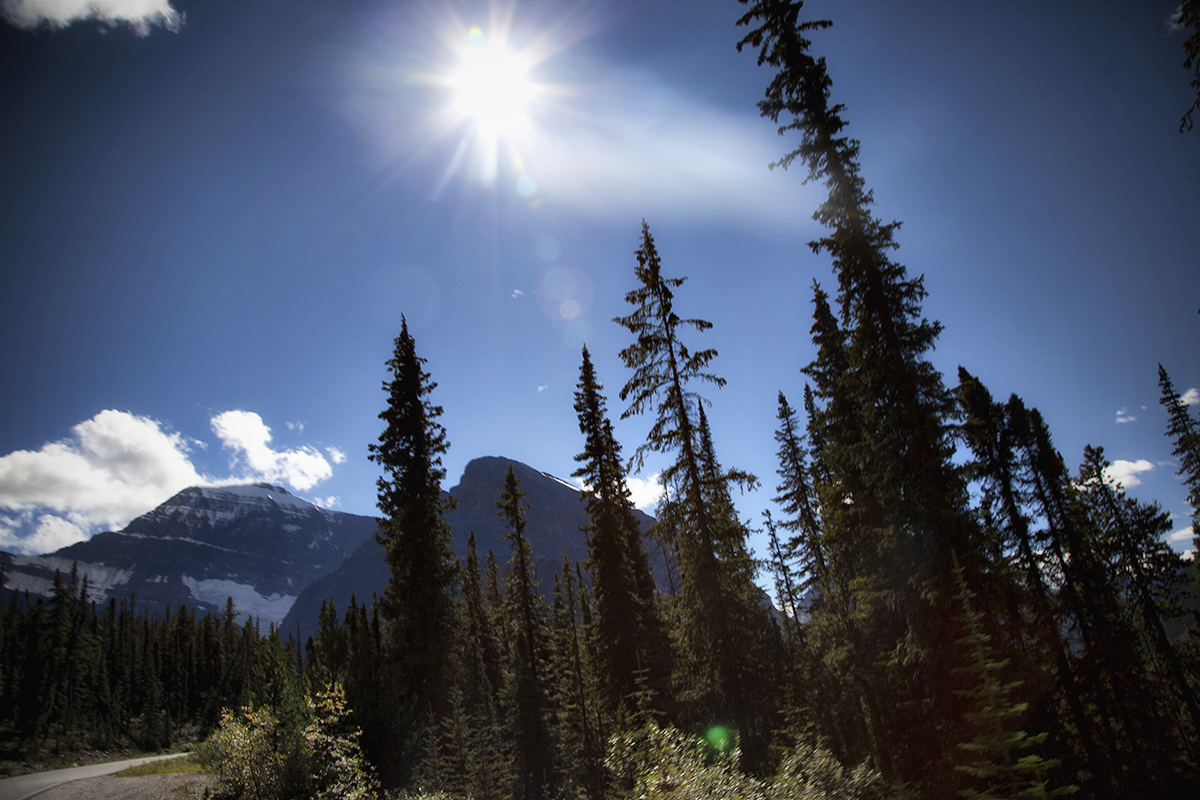 A random photo from the Tonquin Valley… we hiked a circuit in this valley which, from the looks of things, is rarely done. And I am here to tell the tale! Don’t do it! Find a better way!

Basically, we hiked a rarely used route which was sodden with mud and boulders, and filled with downed trees. So, if you weren’t slogging your way through mud, you were walking over small boulders with mud soaked boots, which provided a slippery surface, and took much care and concentration. Then, you had to duck and cover to the nth degree to fit your daypack under a downed tree.

It’s not worth it I tell you!

But the ending route is a beautiful walk with stunning vistas, looking at the Tonquin Valley, and Surprise Point. And that is well worth the visit, and even helped to make up for the horribly soggy route through which we trod all morning, on what proved to be the most difficult morning of our trek. 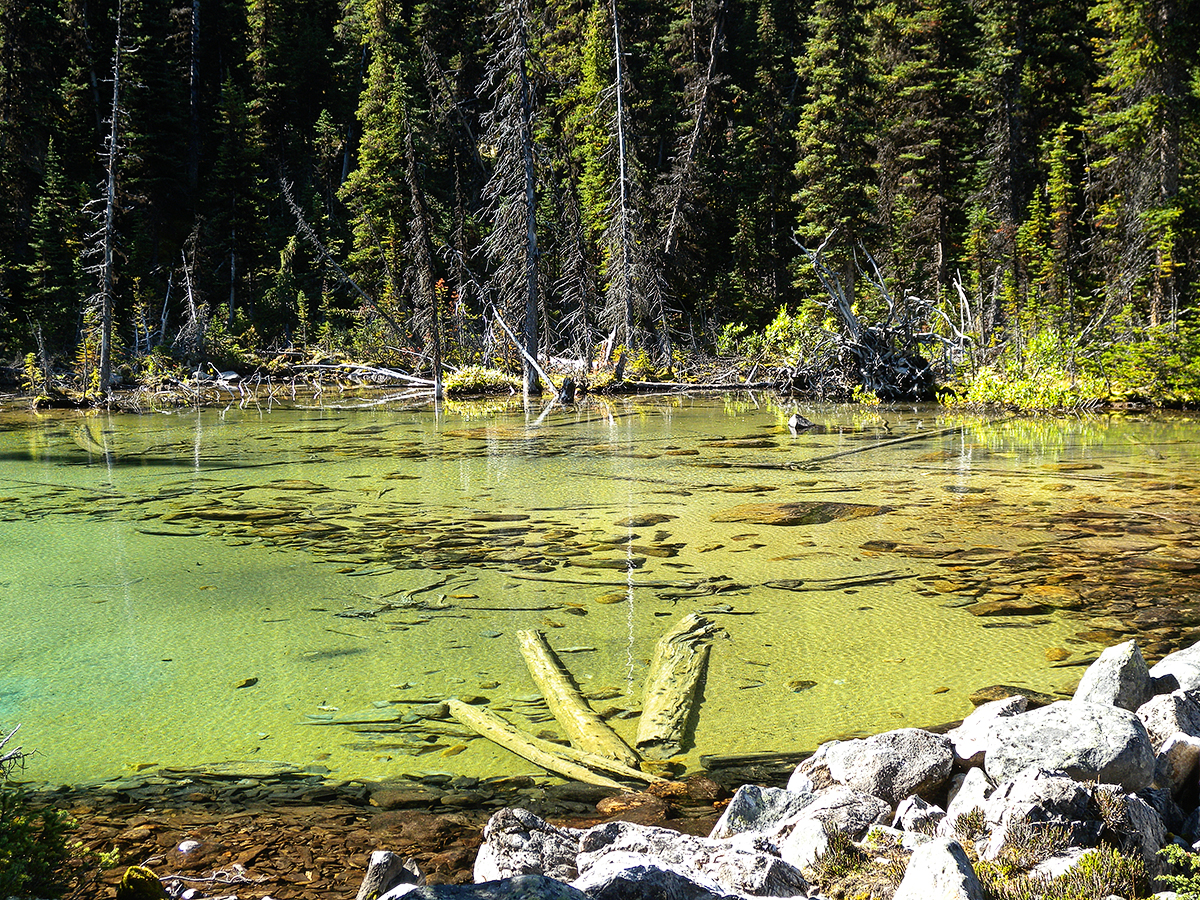 The thing is, it was a loop. So it made perfect sense to do it. (The fact that it is rarely used is not advertised as far as I know.)

But I had not slept a wink all night due to an air mattress deflation issue. And because Fr. Jimmy had offered me his air mattress, which was full length as opposed to my 3/4 length backpacking version, and I had taken it, I ended up unfairly attributing my uncomfortable lack of sleep to him, while he snored soundly on my delightful 3/4 length, and ultra light, sleeping pad which is more than fine for me! (He also had a full length cadillac-pad with him…)

This is a beautiful, pristine back lake. 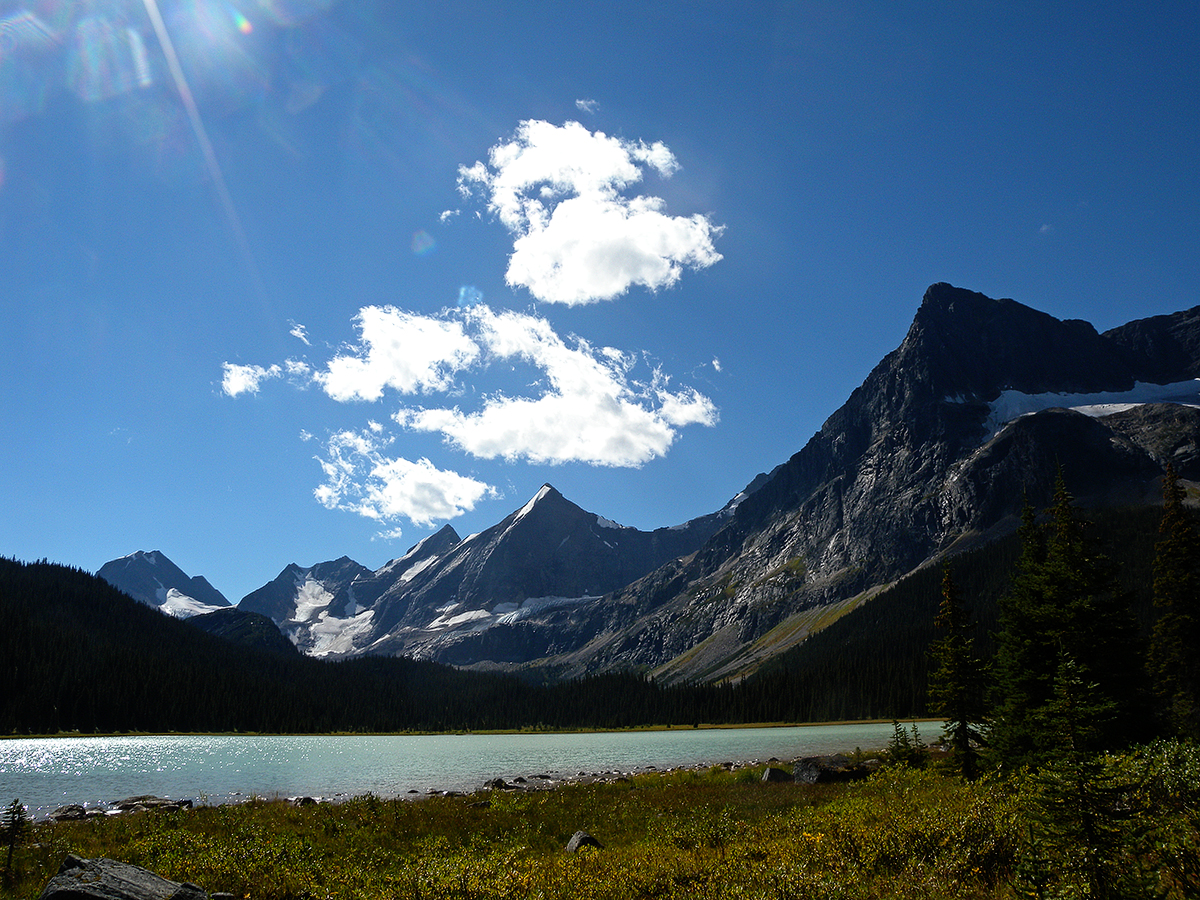 One of the many beautiful views coming out of the dark, humid, and soggy back part of the (rarely used) loop.

The first part, as I mentioned, was below the tree line and was basically nothing but mud and boulders. I was miserable and cursing every moment and every step, and it took forever and a day for me to make my way through the mess.  We met a large group coming from the opposite direction, and they looked about as unenthusiastic as did I. Fr. Jimmy has only ever talked about this part of the hike as a wonderful time. 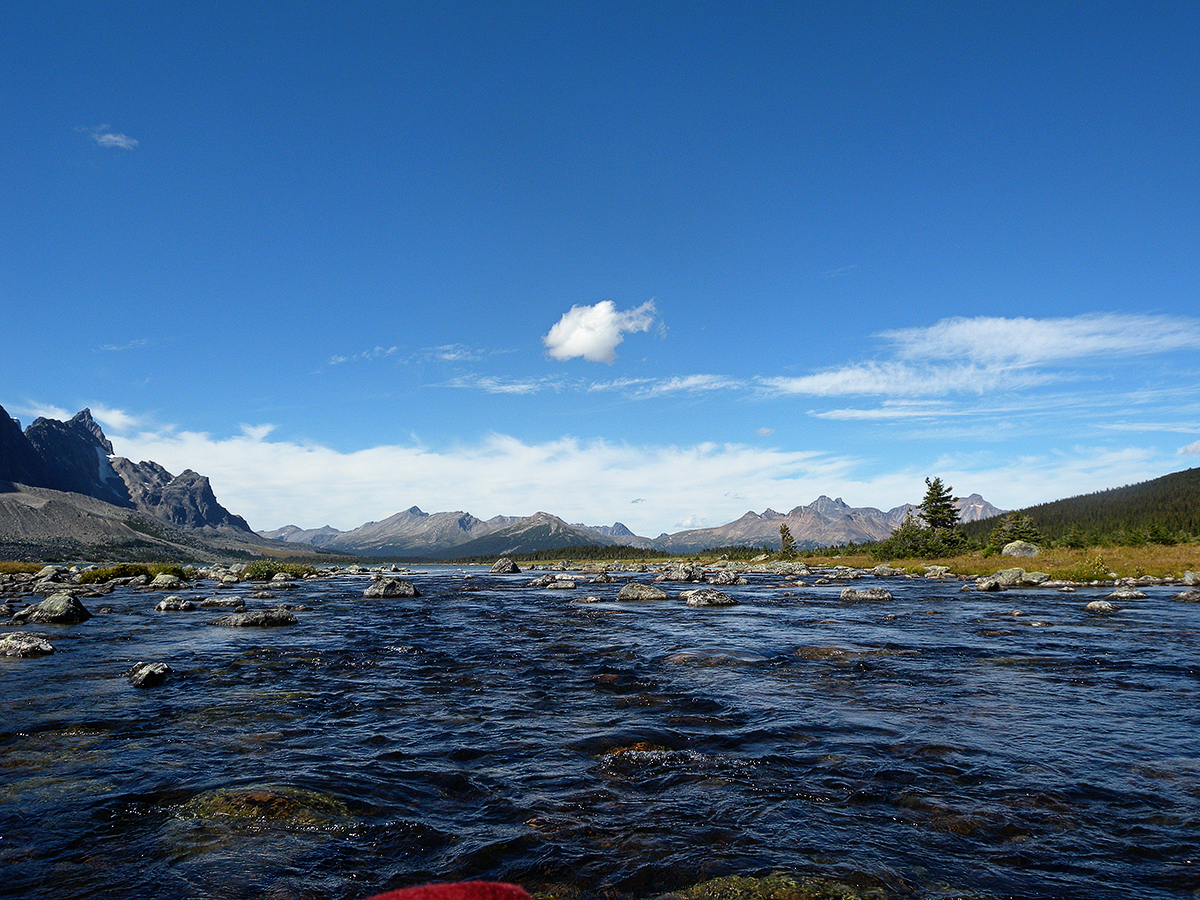 But we eventually reached Surprise Point, and then made our way across a large field, ending up on this bridge overlooking the river,  flowing from the lake through Tonquin Valley. The should call it Pleasant Surprise Point, but whoever named it obviously didn’t hike in from the back way.

The morning had gotten off to a lousy start. Sleepless, and freezing on the ice cold dirt which should have been my comfy mattress pad,  Fr. Jimmy stood outside the tent saying something along the lines of “I made breakfast and your oatmeal is on the table freezing right now.”

Now I’m only human, and some things hit me the wrong way, no matter who says them.  So I ended up being pretty miserable to be around for quite a few hours, as we slogged through mud for what seemed forever and a day.  And then crawled under trees which snagged our packs.  And then crossed small boulders with mud soaked boots.  It was such slow going I soon lost any hope of finishing the trail and reaching our campsite any time before darkness set in.  And in the twilight hours before then, as I would trod on in my weakened state of despair, I knew I would only make the perfect bear bait.  I was doomed. 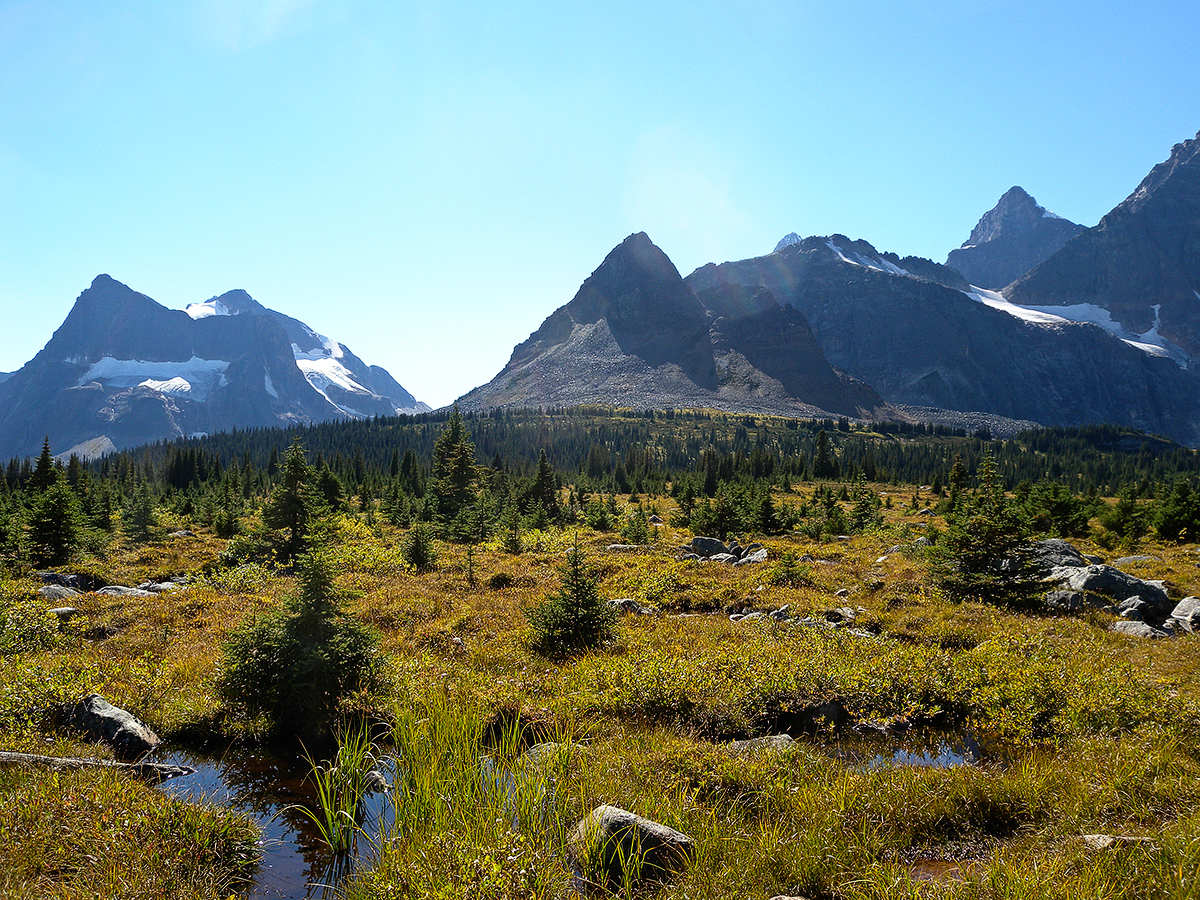 But Surprise Point was a turning point, in many ways.  We dried our boots out after having lunch on the bridge, and then slogged through this marshy wilderness with mud up to our ankles.

This is not a marsh on the side of the trail; it’s actually the trail and you have to walk right through it as there’s no way around it. That didn’t really help, and only tied in more perfectly with the entire morning. But the going was seeming to be better. 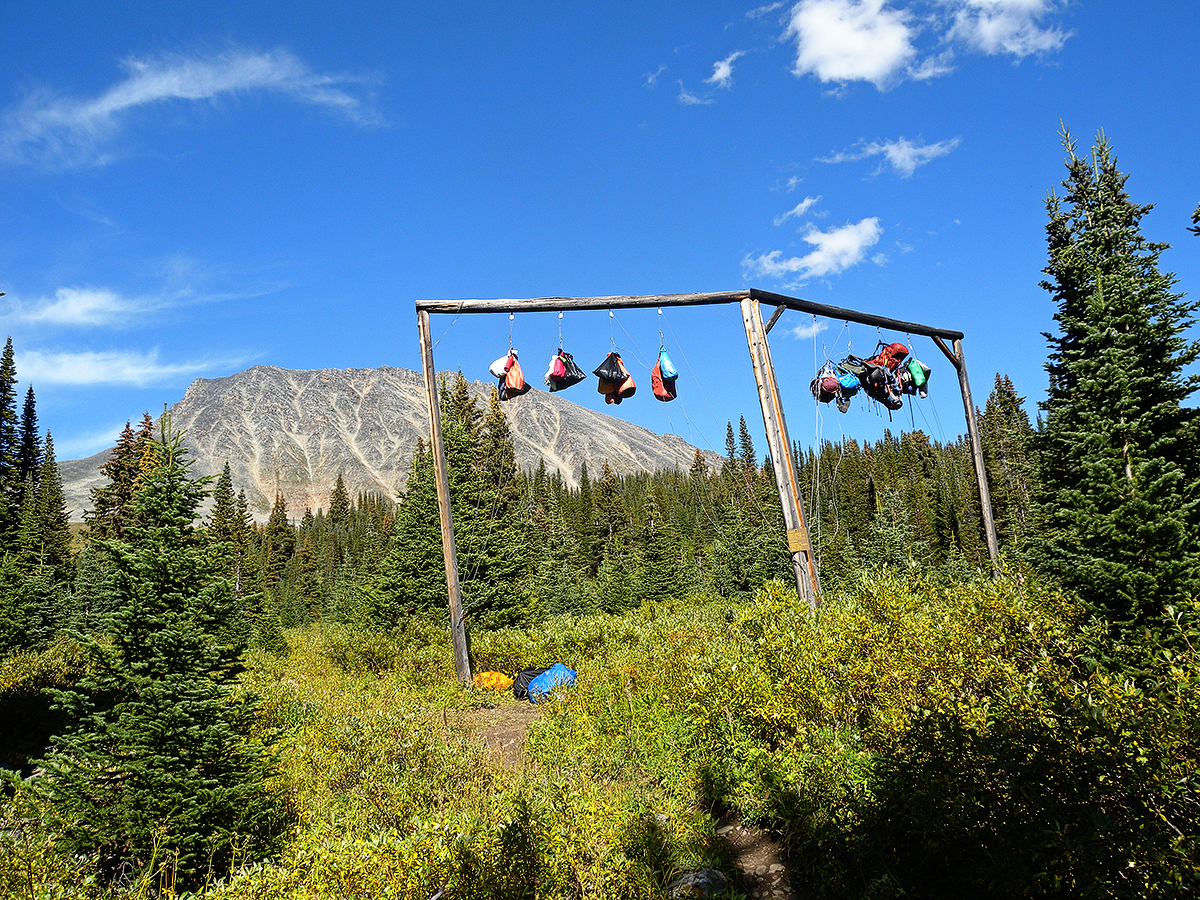 The trail was a little difficult to follow through the Tonquin Valley campsite, still it’s not brain surgery. 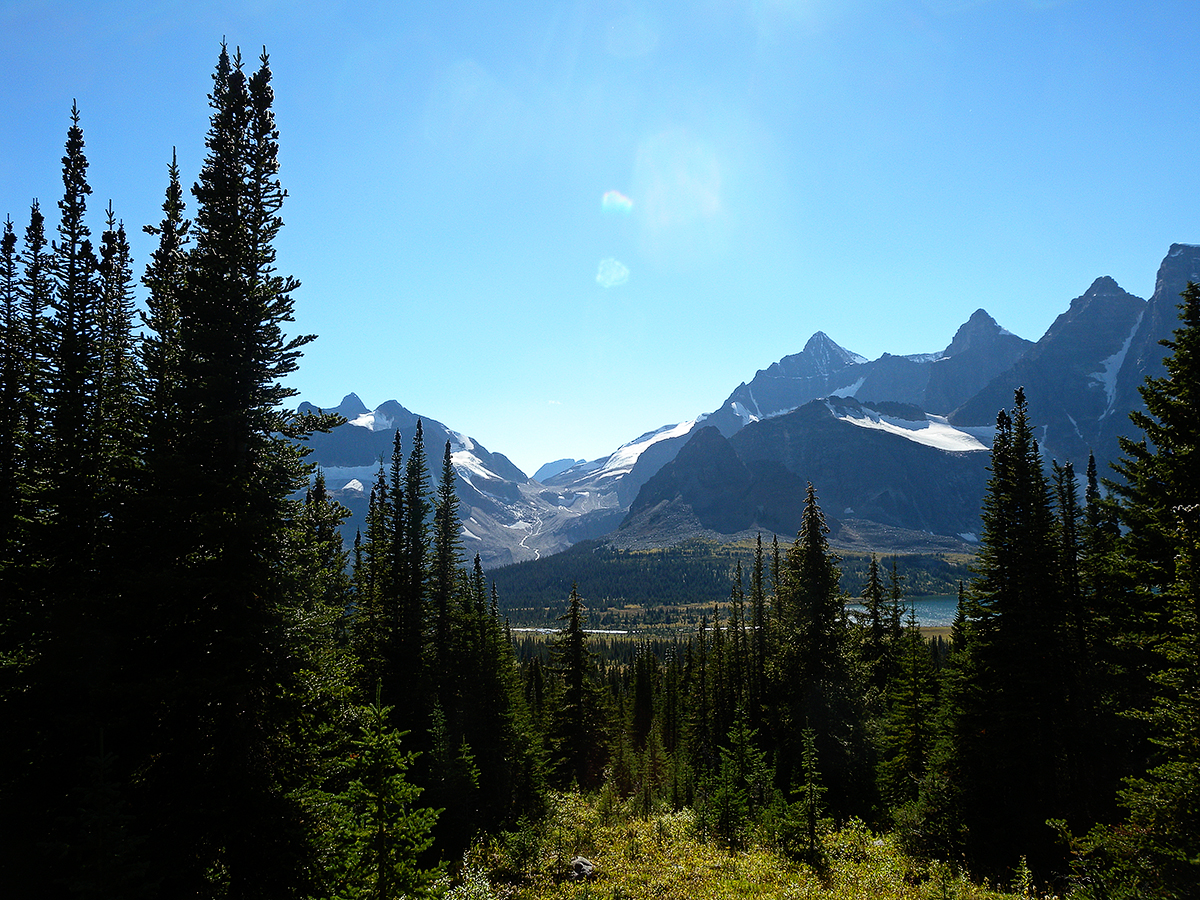 And within 20 minutes or so of leaving the Valley behind, you’re on the trail out.  Which of course is the trail most sane people also hike in on.  The trail was dry, my spirits high, the going super easy, and the walking …’fast as lightening’, as Sr. Clarita would say. 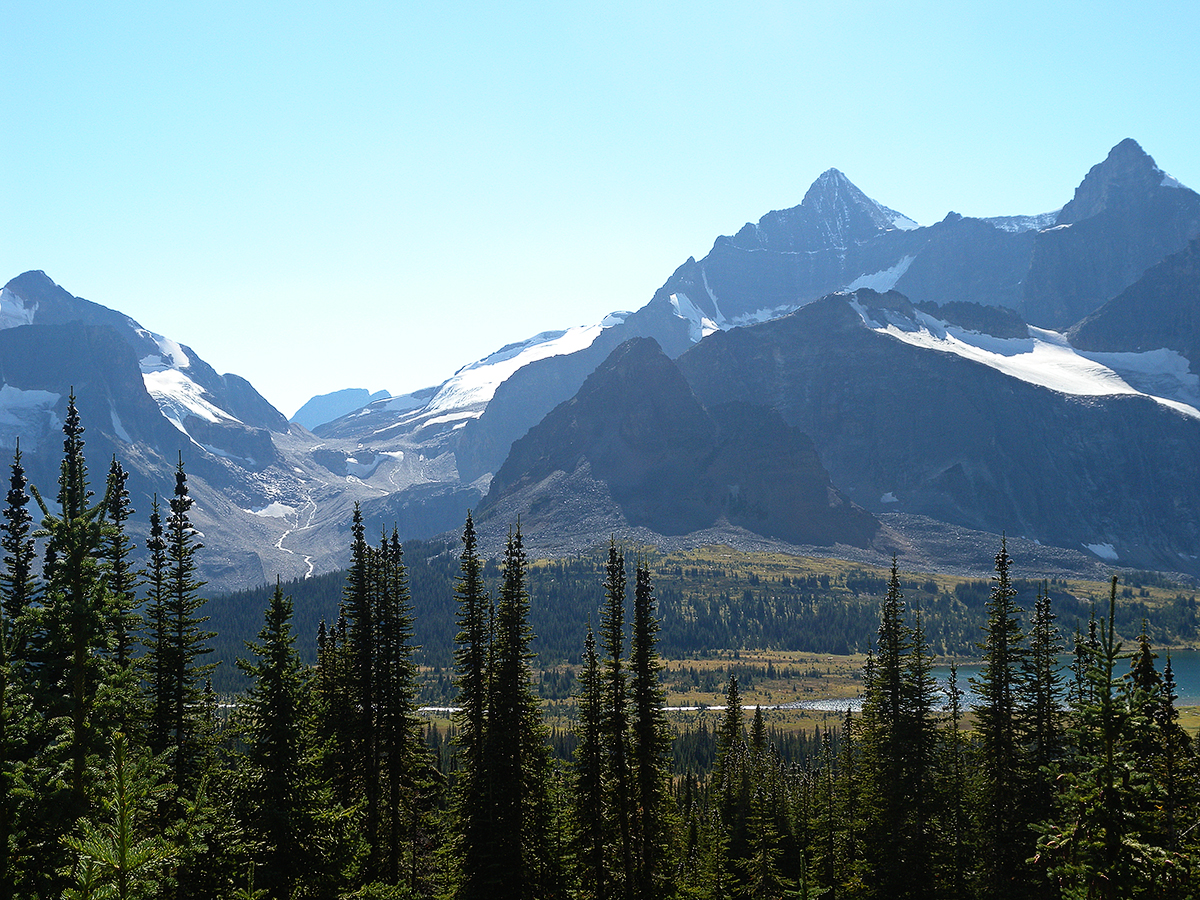 Walking the rest of this trail was a piece of cake. Which is a good thing, since there were bout 8 miles left to go. The bridge we rested on is supposed to be visible in all of these pics, as I was quite conscious when I took them, to be able to see it. Still, I can’t see it in these pics for the life of me. 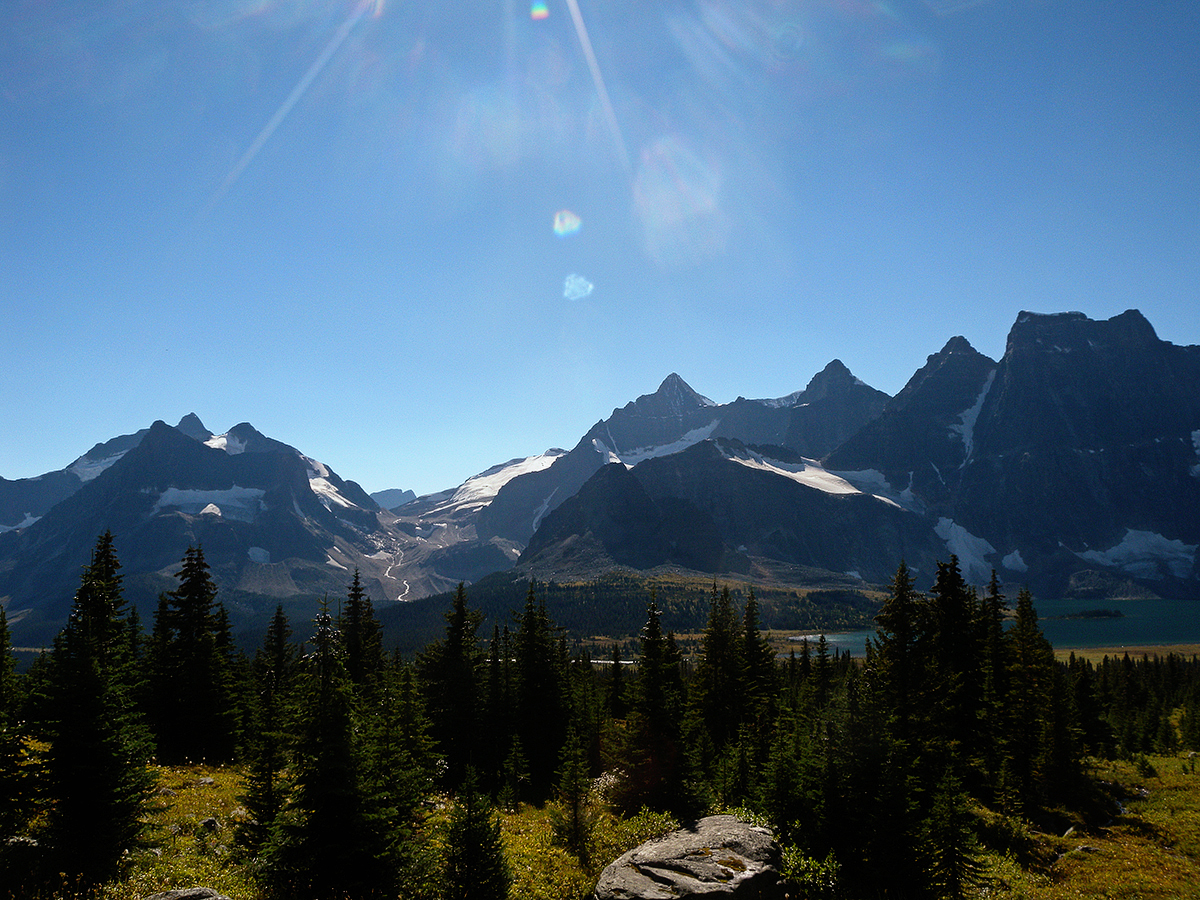 We made it back to the Astoria Campground in well enough time to watch the sunset with our camp neighbors, who were fixing S’mores for all, and to have lots of chuckles recalling the days highs and lows. And there were a lot of lows to get out of the system! Thing is, the highs totally mitigated the lows.

The Tonquin Valley is a must see. Still, I’d recommend taking the regular trail in, and not worrying over the loop, especially if it’s been raining. 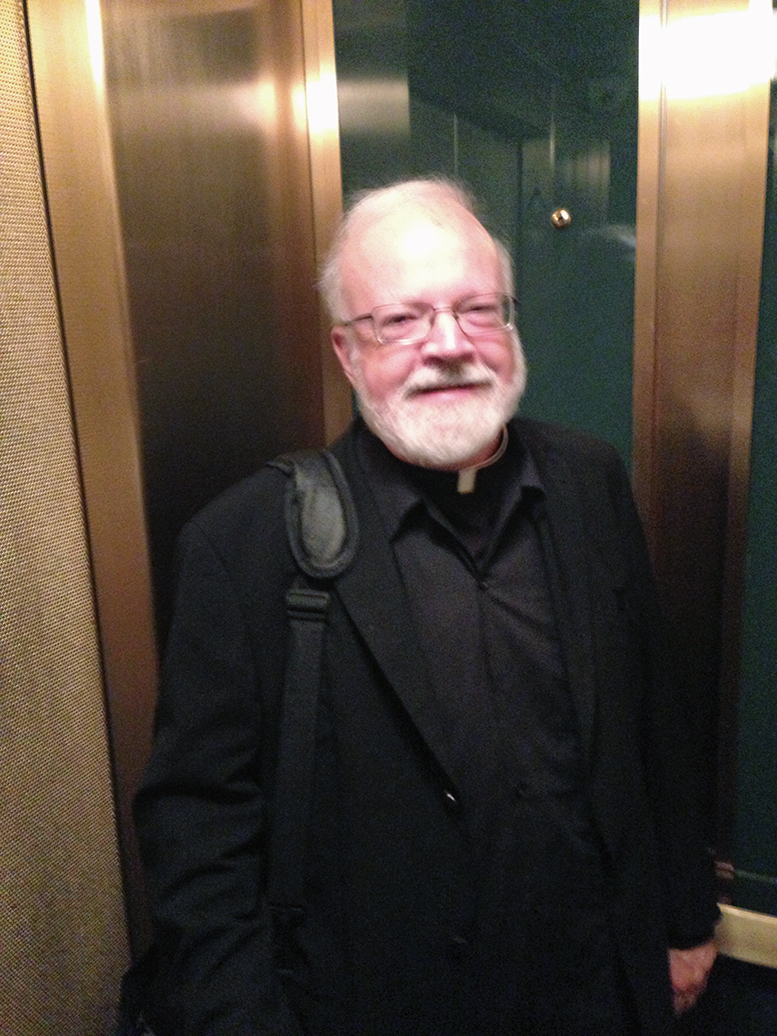 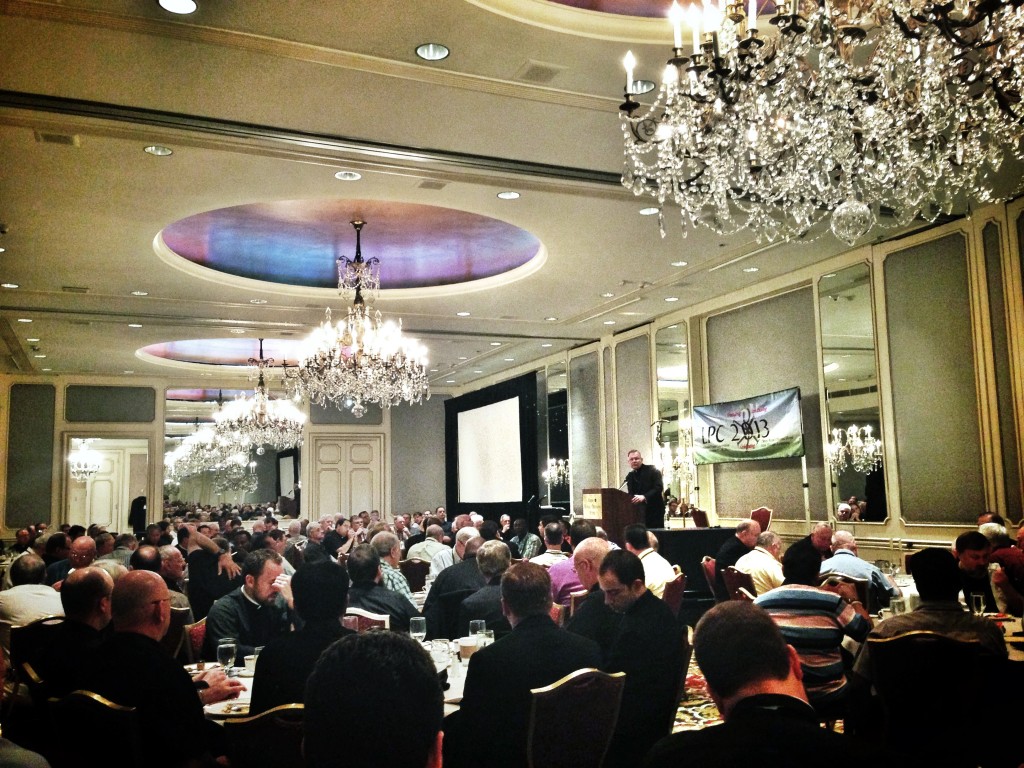 “Jesus said to his disciples:
“I am the true vine, and my Father is the vine grower.
He takes away every branch in me that does not bear fruit,
and everyone that does he prunes so that it bears more fruit.” 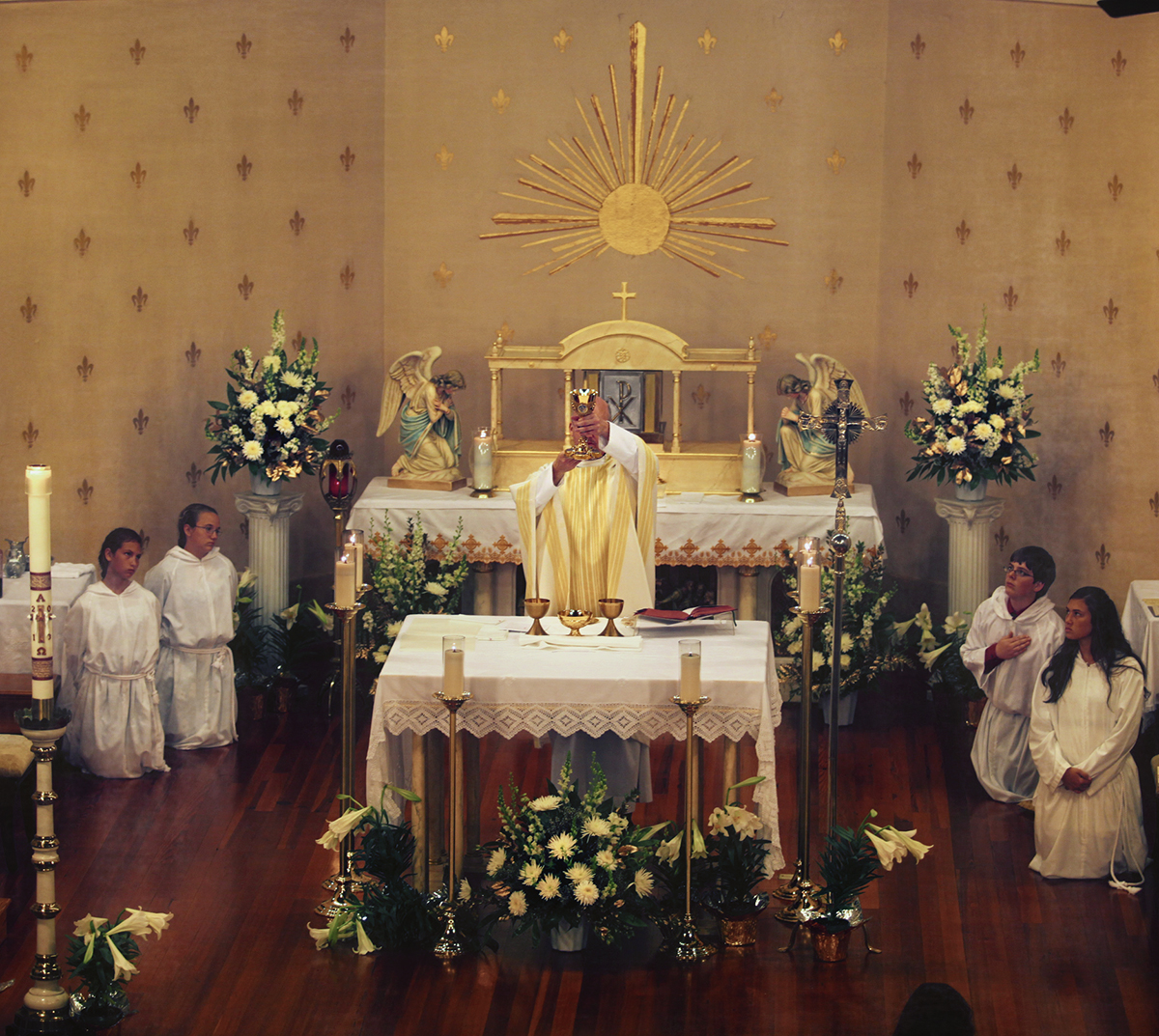 Our Sanctuary at Easter, 6:00pm Mass…

In the early 00’s, with much anticipation, the General Instruction of the Roman Missal (the GIRM — fondly pronounced “germ” to most who reference the work,) was published with revised guidelines that set everyone abuzz with talk of change.

A point of confusion is paragraph 43, which says that the Faithful should stand from the end of Offertory (Pray brethren that my sacrifice and yours…) until the end of Mass; although “if appropriate they may sit or kneel during the period of sacred silence after Communion.”

Also, “In the Dioceses of the United States of America, they should kneel beginning after the singing or recitation of the Sanctus (Holy, Holy, Holy) until after the Amen of the Eucharistic Prayer, except when prevented on occasion by ill health, …et cetera… The faithful kneel after the Agnus Dei (Lamb of God) unless the Diocesan Bishop determines otherwise.”

So, while it’s written that the Faithful should stand from the end of Offertory to the end of Mass, perhaps sitting after Communion, the Dioceses of the United States of America, have permissions for some other occasions of sitting and kneeling, which respects our tradition of doing so.

And, although people in the United States have historically never returned from Communion to remain standing, there was for some reason a general confusion about whether this was mandated or not. In fact, the confusion reached such a fever, that Cardinal George of Chicago wrote in complaining about the matter.

The Holy See responded, “[The rule, for the universal Church] is intended, on one hand, to ensure within broad limits a certain uniformity of posture within the congregation for the various parts of the celebration of the Holy Mass, and on the other, to not regulate posture rigidly in such a way that those who wish to kneel or sit would no longer be free.”

In other words, when you return to your place after Communion, it is perfectly acceptable to sit or to kneel. And in fact, it has long been customary in the US to do so. May God bless you with a beautiful weekend.