Because Lent is still so far away, and is usually much sooner during the year, we’re hearing the Readings for the 7th and 8th Weeks in Ordinary Time. That’s something we usually don’t do, because usually it’s already Lent by now.

But as we all know, Easter Sunday is the First Sunday after the First Full Moon after the Spring Equinox. And since all of that is coming to pass a bit later this year, here we are with readings we rarely hear before Lent.

The whole schema we encounter today speaks so clearly to our hearts about the seductive and voluptuous allure of revenge. And how we’re supposed to avoid it like the plague.

We all know this.

But at times we just want revenge so bad its like… what do you mean turn the other cheek? What?! NO!!!!! We want to revel in it with bloodthirst and wonton abandon.

At some point one realizes that we just have to tend to our own flower beds, so to speak, if we wish to live a good life and experience the joys that come from having character forged in adherence to Christ.

Once last year, I was helping at the installation Mass of new Pastor in a Parish I was helping out in. The Dean was present to administer the proper oaths, etc., and we were all preparing to process in. As administrator at the time, I had made all the arrangements, and suffered through some over which I ended up having no control. But to my mind, everything was well placed and going well.

The music started, the hymns were being sung, and altar servers stepped forward in unison. All of a sudden I heard the Dean behind me “Oh great, I have to process in behind this.” He was so disgusted.

He was referring to me of course.

I didn’t give the matter a lot of thought at the time, but I stepped back next to him and leaned down a bit (he’s very short and I tower over him,) and said, ‘What?!” As if that wasn’t bad enough, I went on to say, and this was all very casual as far as I was concerned, as I might speak to my family or friends who were giving me a hard time, “You sound like our former Archbishop.”

So, I added in, “No, I take that back, it was actually his predecessor (whom I love,) who had such issues with his height.”

And then I stepped back in line and processed up.

When I reached the Sanctuary, I waited for the Dean and the new Pastor before genuflecting, but they had waited until I was all the way up before even starting. They wanted distance.

And they have it. 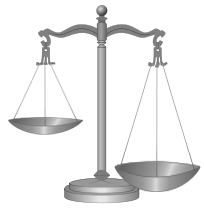 Rejection in life, for whatever reasons, is very natural in society. And we will always be running up against persons of small minds, small wills, against the closed enclaves of power, against popular opinion, against so many things that we think are the enemy.

But they are not the enemy. The enemy is prowling around like a lion, waiting to devour those who stumble.

Let no one deceive himself.
If any one among you considers himself wise in this age,
let him become a fool, so as to become wise.
For the wisdom of this world is foolishness in the eyes of God,
for it is written:
God catches the wise in their own ruses,
and again:
The Lord knows the thoughts of the wise,
that they are vain.

We can only grow as a Christian when we allow all of the crud which people throw at us to roll off our backs. And then get up and keep living life well, as a follower of Jesus Christ.

But I say to you, love your enemies
and pray for those who persecute you,
that you may be children of your heavenly Father,
for he makes his sun rise on the bad and the good,
and causes rain to fall on the just and the unjust.